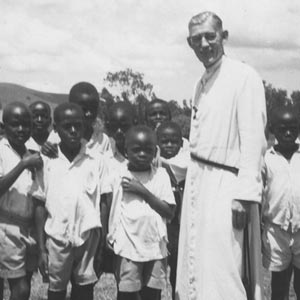 The oldest of six children, Bishop Vincent McCauley was born on March 8, 1906, in Council Bluffs, Iowa. His parish school, St. Francis Xavier, first awakened in him a desire for missionary work and evangelization. Inspired by Holy Cross priests who preached a mission at his parish in the fall of 1924, McCauley left Creighton University (where he had just enrolled as a freshman) and entered seminary with the Congregation at the University of Notre Dame.

McCauley professed Final Vows in Holy Cross on July 2, 1929. As he was interested in the missions, he was sent to the Foreign Missionary Seminary in Washington, D.C., and was ordained a priest on June 24, 1934. His departure to the missions in East Bengal in India (a territory that today encompasses Bangladesh and part of India) was delayed two years until October 1936 because of a lack of funds due to the Great Depression.

McCauley’s work among the neglected Kuki Christians (a distinct minority in the overwhelmingly Muslim country) in Agartala confirmed his calling as a missionary. Unfortunately, illness forced him back to the United States in May 1944. He spent nearly a year in recovery before joining the formation staff at the Foreign Mission Seminary in Washington.

Explore a Photo Gallery of Missionary Work Around the World

The next 13 years of his life would be devoted to seminarian formation and mission procuration, a role in which McCauley made famous the mission appeal slogan – “Wanted to build a better world: Few architects, more bricklayers.” 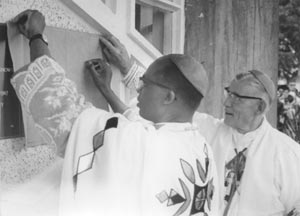 In 1958, McCauley was sent to lead the Congregation’s new mission to Uganda. As had been the case in East Bengal, the Congregation’s work in western Uganda focused on building up the local Church through the establishment, renovation, and strengthening of parish churches and schools.

When Rome split western Uganda into two dioceses, McCauley was appointed bishop of newly created Diocese of Fort Portal. As Bishop, McCauley built the diocese from the ground up, founding numerous parishes and diocesan structures, along with St. Mary’s Minor Seminary for local priestly formation. 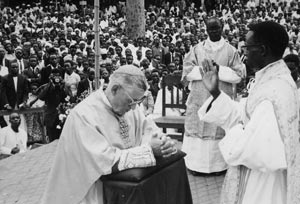 Remembered for his compassion and leadership, Bishop McCauley guided the Church in aiding countless refugees, widows, orphans, and migrants in the region during the political turmoil of 1960s and 70s. He also took leading roles in the creation and administration of East Africa’s episcopal associations.

His leadership in the establishment of both an East African seminary and the Catholic University of Eastern Africa remains one of his distinctly Holy Cross legacies to a region in which global Catholicism finds one of its modern centers-of-gravity.

Bishop McCauley’s commitment to the enculturation of the Gospel can be heard in his advice to fellow Holy Cross priests in mission.

We no longer use the term ‘adaptation.’ The suspicion is that ‘adaptation’ implies putting African clothes on European and foreign interpretations of Christ’s message. To the African Church the message of Christ is universal and, therefore, should be presented to the Africans as God’s message to Africans. It must be something that can be understood and put into practice in Africa … The Gospel, the Church, must be incarnated in the African culture in which we live.

In August 2006, the cause for canonization of McCauley was introduced in the Congregation for the Causes of Saints. As Servant of God, Bishop McCauley’s cause undergoes review by the Diocese of Fort Portal, Uganda, Holy Cross seeks to emulate his faith, talent, energy, and joy – gifts by which he made God known, loved, and served.

Seek the intercession of Bishop McCauley