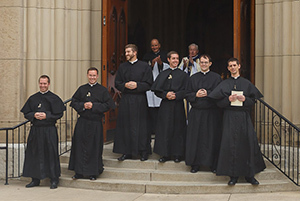 “These six young men are outstanding individuals who are a great sign of hope for our Province and indeed our Congregation,” said Fr. Thomas J. O’Hara, C.S.C., the Superior of the United States Province. “Truly all in Holy Cross rejoice as these our brothers make public their perpetual vows to follow the Lord as members of the Congregation of Holy Cross. They have been prepared well to be effective ministers to all whom they will encounter.Their lives will be lives of service and they will bless and be blessed by those whom they serve.” 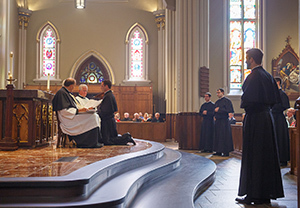 Fr. Richard V. Warner, C.S.C., the Superior General of the Congregation, presided and preached at the Mass of Final Profession. He also received the vows of the six men as they professed to live forever “poverty, chastity, and obedience according to the Constitutions of the Congregation of Holy Cross.”

“As we come together in this beautiful Basilica for the Final Profession of six of our seminarians of the United States Province of Priests and Brothers, our hearts are filled with gratitude and joy,” said Fr. Warner in his homily. “We are grateful to God for the grace of a religious vocation which he planted in the hearts of these men and which led them to spend a number of years in guided and personal discernment.”

Fr. Warner continued: “As Holy Cross religious, we want to live out our baptismal commitment in a public way that gives witness to what we believe and profess. In this way, we hope to profess our love for Jesus Christ and his holy people. We understand both the essence and the challenge of this aspect of our lives. Our Constitutions remind us that ‘if we drink the cup which each of us is poured and given, we servants will fare no better than our master. But if we shirk the Cross, gone too will be our hope.’ 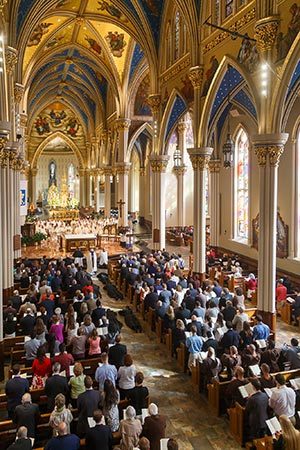 “As we deepen our relationship in love to Jesus, he passes on to us what he has learned from the Father, and we pass from servants to friends. Jesus has chosen us. Jesus gives up his life for us, and through his life-giving death, we pass from life through death to eternal life,” said Fr. Warner.

The large class of Final Professions drew a large crowd of Holy Cross religious, family, and friends to the Mass in the Basilica. The celebration continued afterward with brunch at Moreau Seminary. Later in the evening there was a festive social at the seminary for the many out-of-town guests.

The following day, Sunday, September 14, which is the Feast of the Exaltation of the Holy Cross, the six men were ordained deacons in the Chapel at Moreau Seminary. The Most Rev. Kevin C. Rhoades, Bishop of Fort Wayne-South Bend, presided and preached at the Mass.

Bishop Rhoades went on to make special note of the fittingness of this men being ordained on the Feast of the Exaltation of the Holy Cross: “As we heard in the second reading today, God raised Jesus up and gave Him the Name above every other name. In God’s eyes, the Cross is the greatest triumph. The way of human judgment is very different, but God’s judgment far surpasses ours. We exalt Christ and His Cross, the Cross by which God lifts up humanity and all creation, the Cross that heals us of the sin that poisoned humanity and all history. That’s why the whole Church sings today: ‘Ave crux, spes unica!’” 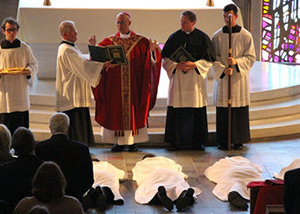 Following their Ordination to the Diaconate, the six men returned to the apostolates where they are assigned for ministry this year. Four of the men—Deacons Fase, Halm, Ponisciak, and Rehagen—are working at parishes in the United States sponsored by the Congregation. The other two—Deacons Mouton and Pepper—are at colleges founded and run by the Congregation. Mouton is at Stonehill College in Easton, Massachusetts, while Pepper is at King’s College in Wilkes-Barre, Pennsylvania.