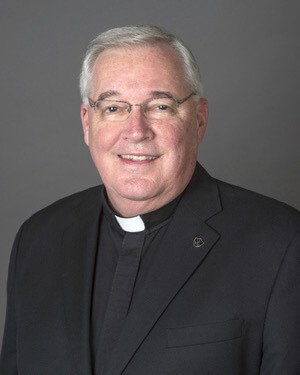 Initially named interim president of the college by the Board of Trustees in April, 2017, the Corporate Members of Holy Cross College voted unanimously on July 31, 3017, to appoint Fr. Tyson the college’s fifth president. He succeeds Br. John Paige, C.S.C., who had served as the college’s president since 2011.

“On behalf of the Brothers of Holy Cross and of the Corporate Members of Holy Cross College, I extend hearty congratulations to Fr. David Tyson upon his appointment as president of Holy Cross College,” said Br. Chester Freel, C.S.C., Provincial Superior of the Midwest Province, and President of the College’s Corporate Members. “The college is most fortunate to have someone of Fr. Tyson’s proven skills and knowledge leading the college into an even brighter future educating the minds and hearts of its students.”

“I am honored by the Brothers’ confidence in me,” said Fr. Tyson at the time of his appointment in July. “It has been a blessing to be a part of the Holy Cross College family … and I am grateful for this opportunity to continue building its future.” 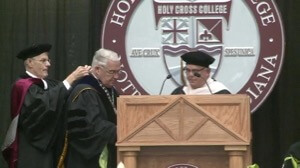 While the Installation Ceremony took place on Friday, October 6, the inaugural festivities began on Thursday, October 5, with a picnic for the student body. Then on Friday morning, prior to the installation, there was an Inaugural Mass in St. Joseph Chapel, at which the Most Rev. Kevin C. Rhoades, Bishop of Fort Wayne-South Bend, presided. In true Holy Cross fashion, the Installation Ceremony was followed in the afternoon by a reception and then later a formal dinner.

Prior to being named present of Holy Cross College, Fr. Tyson has had a long and illustrious career in Catholic higher education. Soon after his Profession of Final Vows in 1974 and his Ordination to the Priesthood in 1975, Fr. Tyson went to Indiana University in Bloomington and graduated in 1980 with a Doctorate in Higher Education Administration.

Following his graduation, he joined the faculty of the University of Notre Dame in Notre Dame, Indiana, serving in the Department of Management. Quickly, he was selected by then-University President Fr. Theodore Hesburgh, C.S.C., to serve as his Executive Assistant and then as Vice President for Student Affairs.

In 1990, he was elected the 18th President of the University of Portland in Portland, Oregon. Under Fr. Tyson’s leadership, University of Portland “became one of the best ten regional universities in the West (according to U.S. News & World Report), was honored nationally for an excellent education at reasonable cost, won plaudits from the White House for student service to the community, earned its first NCAA national championship (women’s soccer, 2002), and saw faculty members honored as the Carnegie Foundation national and state professors of the year” (Christus Magister Citation). 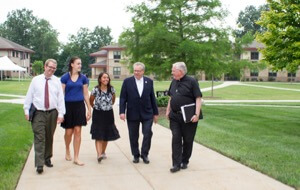 Most recently, prior to his election as President of Holy Cross College, Fr. Tyson was the St. André Bessette Director of Nonprofit Professional Development at Mendoza College, University of Notre Dame.

Founded by the Brothers of Holy Cross in 1966, Holy Cross College had its origins in providing a two-year education to the religious brothers of the Congregation of Holy Cross in order to prepare them for further studies and ministry. Within two years, the Holy Cross Brothers began welcoming laymen and women as well into the school.

Over the years, a four-year Bachelor of Arts program was added, yet the core of the College’s mission has remained helping prepare students in unique ways for service in society and the next stage in their educational development. It is a mission, according to Fr. Tyson in his inaugural address, that has a unique place in the higher education landscape of the United States today. 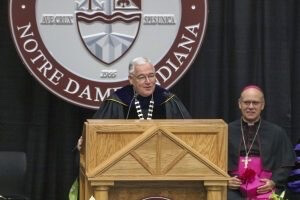 “I would love to see us as a country, a republic, recapture our sense of the common good,” said Fr. Tyson. “And it’s places like this, and places like other Holy Cross institutions, that provide that education. We’re counter-cultural now. We have something to offer that isn’t just typical. We’ve heard one of the Holy Cross mantras: ‘the competence to see and the courage to act.’ And that’s what it’s about.”

The key, Fr. Tyson continued, is not just what the College teaches, but how it goes about teaching it.

“When I arrived here in April, I had already had a sense, as a Trustee, that something really interesting took place here. And, that interesting thing was much more than content. It was more the people who taught them,” said Fr. Tyon. “There is, what I have recently put in my own brain, a pedagogy of presence by the faculty here at Holy Cross College, that is absolutely palpable.

“To come in as I did with new eyes and a certain set of filters, et cetera, to be able to find that and see that instantaneously was astonishing to me and made me very, very happy about the potential for the future.”