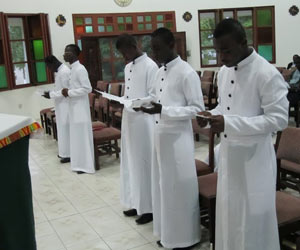 “In this Year of Faith, we rejoice to see that there are young people who are ready to take up the mantle of religious brotherhood in the Church here in Ghana,” said Br. Joseph Tsiquaye, C.S.C., the Novice Master in Ghana. “This is in recognition of the tireless efforts and ministry of Brothers of Holy Cross in Ghana over the years.” 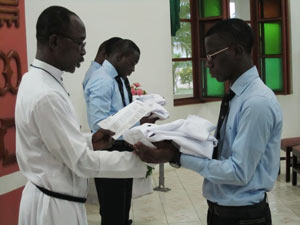 View more pictures from the reception of the new novices

“For these young men, the focus of the novitiate year is to help them to develop the necessary and adequate tools and skills, both spiritual and human, that will help them grow formatively to become the persons God would want them to be uniquely and most deeply. This year is a journey into developing deeper personal relationships: firstly, with the Triune God, Father, Son and Holy Spirit; secondly, with the brothers in community; and thirdly it is a journey into service as ambassadors of Christ, and children of Blessed Basile Moreau,” said Br. Tsiquaye.

They will overlap for six months with the 13 novices who were received into the St. André Bessette Novitiate in January. Those 13 men are currently on their apostolic experiences at various ministries run by Holy Cross in Ghana. 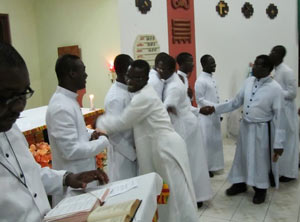 Learn more about the Congregation in Ghana

One of the stated hopes of the change is to collaborate more closely with the Congregation’s District of East Africa, which serves Uganda, Kenya, and Tanzania.

“After the period of initial formation, these young men will join ranks with the present membership of Holy Cross in responding to some of the urgent needs of the Church in Ghana by reaching out to the many archdioceses and dioceses that are looking for avenues of providing quality Christian education for the emerging generations among the lay faithful,” said Br. Tsiquaye. “Our charism of being educators in the faith enables us to respond to these needs by forming minds and hearts of the young people for the future growth of the Church, not only in Ghana, but in the whole sub-region.”

In the coming weeks, the Congregation will celebrate first professions, as well as the receptions of new novices, both in West Africa and in the United States.