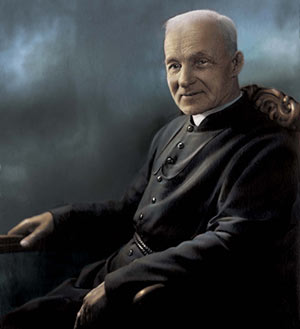 August 9 is the birthday of St. André Bessette, the first canonized saint of the Congregation of Holy Cross. Throughout this month, St. Joseph's Oratory in Montreal, Canada, has been celebrating this humble, saintly Holy Cross brother with a series of special events.

"We began the month of Brother André in 2010 in the context of the canonization, and since then, it has become a regular feature at the Oratory," said Rev. Claude Grou, C.S.C., the Rector of the Oratory. "The celebration of the birth of Brother André on August 9 is, however, a much older tradition."

On St. André's birthday, the Oratory set aside three hours in the afternoon for special veneration of the reliquary of the saint made in commemoration of his canonization. The Masses at the Oratory that day were also celebrated in thanksgiving for the life and ministry of St. André, with the 7:30 p.m. Mass concluding with a candlelight procession.

See the calander of events to celebrate St. André's birth

The following weekend, August 10-11, the Masses at the Oratory were held in honor of caregivers, and a petiton was present for pilgrims to sign requesting that St. André be named the "Patron Saint of Caregivers."

Other special events included a healing Mass with the celebration of the Anointing of the Sick, a pilgrimage to St. André's birthplace in Mont-Saint-Grégoire, and weekly celebrations of the Stations of the Cross.

Explore a photo gallery of the Oratory 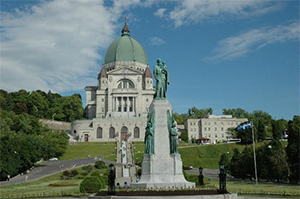 St. André is known as the “Miracle Man of Montreal” for the many sick people who experienced miraculous healings through his prayers and ministry. St. Joseph's Oratory, Canada’s largest church and the world’s largest shrine dedicated to St. Joseph, was built due to his inspiration and efforts in honor of his favorite saint, the foster-father of Jesus. Each year, over two million pilgrims visit the Oratory, located on Mount Royal in Montreal.