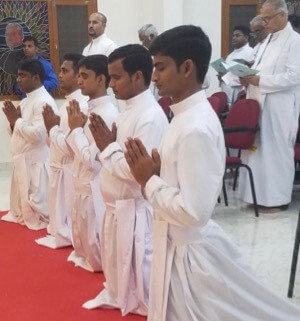 On October 15, 2018, at the newly inaugurated St. Andre Home in Sakalavara, Bangalore, the Congregation of Holy Cross’s Province of South India celebrated the Final Professions of five of their seminarians. 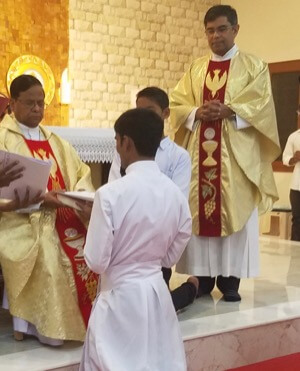 Fr. Leo D’Souza, C.S.C., was finishing his term as Superior of the Province of South India at the time, received the men’s Final Professions and presided at the Mass.

Br. Paul Bednarczyk, C.S.C., Vicar and First General Assistant of the Congregation, preached the homily on the vows and religious life, while Fr. KJ Abraham, C.S.C., the Second General Assistant, blessed and presented the Final Profession ring and cross to the newly professed. Both Br. Bednarczyk and Fr. Abraham were in India for the Province’s Chapter and so joined in the celebrations.

After the Mass, there was a reception and program to congratulate and celebrate the five men. There was also a special welcome and gratitude for the families of the newly finally professed men. All five of the men give credit to their families for helping foster and support their vocations. It was a moving moment for their families and the Family of Holy Cross to celebrate together. 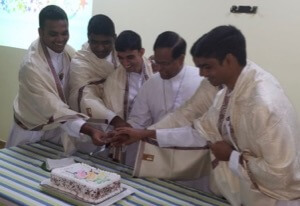 The following morning the Most Rev. Peter Machado, Archbishop of the Archdiocese of Bangalore, ordained the five men to the Order of the Diaconate.  The Archbishop, newly installed in Bangalore as well as a classmate of Fr. Leo, spoke warmly of his various connections to Holy Cross over the years. The Mass took place early in the morning prior to the opening of the Chapter.

All five of the new deacons are now in fulltime ministry placements as they continue to prepare themselves for hopeful priestly ministry in Holy Cross and the Church.