On Saturday, August 3, the Congregation of Holy Cross in the United States celebrated the First Professions of the six novices from the Holy Cross Novitiate in Cascade, Colorado. The Mass of First Profession was held at Sacred Heart Parish in Colorado Springs, Colorado, which is a parish adminstered by Holy Cross. Rev. Thomas J. O'Hara, C.S.C., Superior of the United States Province, presided at the Mass. Rev. Kevin Russeau, C.S.C., the Novice Master, preached the homily. 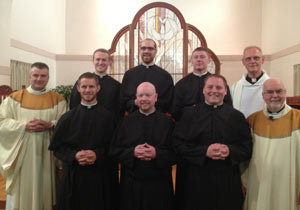 "These first professions are confirmation that God continues to bless and form His Church," said Fr. Russeau. "The profession of these six men highlight a relationship between God and each novice that has been discovered and deepened throughout the novitiate year. These men are in love with God and His Church. They are zealous and creative. They desire to share their relationship with others and help others form similar relationships with God. Their minds and their hearts are open. They will serve God wherever they are sent, whether here in the United States or somewhere else in the Congregation."

The Holy Cross Novitiate in Cascade now sits quiet for a week until next Tuesday, August 13, when 13 men, having completed a year as postulants in the Congegation's United States Province, will arrive to begin their novitiate year. Two days later, on the Feast of the Assumption, the 13 men will be formally received into the novitiate in a Mass celebrated in the novitiate chapel. 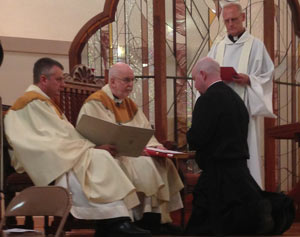 "The core of the novitiate year is building a relationship with Jesus. There is no doubt that novices work in community and at community; that they complete manual labor and good stewardship of the property; that they attend conferences and study Scripture and our Constitutions; that they practice ministry and are show up five times daily for prayer. None of those things matters if the novice does not learn to grow in friendship with Jesus," said Fr. Russeau. 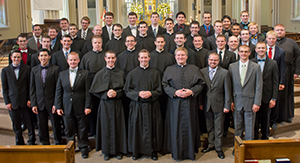 “It is an exciting time to consider the future of the United States Province of Holy Cross," said Fr. James Gallagher, C.S.C., Director of the Office of Vocations. "Part of this excitement is the 13 men entering the novitiate. As well there are the other 43 men who will be in various stages of formation this coming year. They are all good men with an impressive desire to give themselves in service to the Lord and His people. I look forward to their continued growth in zeal to help make God known, loved, and served.”

Along with the incoming novices, the Holy Cross Novitiate in Cascade also welcomes a new Novice Master, Rev. Ken Molinaro, C.S.C. Fr. Molinaro is coming off a sabbatical year after having served the previous 12 years in provincial administration in the United States. He will be assisted on the Novitiate Staff by Rev. Donald Dilg, C.S.C., Assistant Novice Master, and Br. James Blaszak, C.S.C., Procurator.