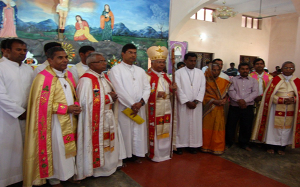 Last Saturday, February 1, Br. Balaraju Madanu, C.S.C., made his Profession of Final Vows in the Congregation of Holy Cross at his home parish of St. Anne’s Church, Vijayanagaram, in the Indian state of Andra Pradesh.

Most Rev. Mar Joseph Kunnath, Bishop of Syro-Malabar Catholic Diocese of Adilabad, presided and preached at the liturgy, which was held in the Telugu language, the native language of that state of India. Br. Sesuraj, C.S.C., the Superior of the Vicariate of Holy Cross Brothers in India, received Br. Balaraju’s vows of poverty, chastity, and obedience according to the Constitutions of the Congregation of Holy Cross.

See a gallery of Final Professions from around the world

The entire Final Vows liturgy was conducted according to the Syrian Rite, as the Diocese of Adilabad is a diocese of the Syro-Malabar Catholic Rite. Following the liturgy, there was a short celebration and cultural program for all the guests. 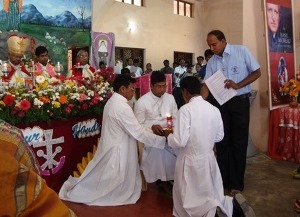 Joining in the day’s liturgy and festivities were five Holy Cross brothers and two Holy Cross priests from the Vicariate of Tamil Nadu, as well as 10 diocesan priests, a number of religious sisters, and many of the lay faithful.

Br. Balaraju was born on November 26, 1980, and is the youngest of eight in his family. He joined the Congregation in 2013 after completing grade 12. After attending the Novitiate, he made his First Profession on May 29, 2006. He then attended three years of studies at Loyola College in Chennai. After a pastoral year working in the Congregation’s school in Salem, he did one year of philosophy and two years of theology at the Jnana-Deepa Vidyapeeth (JPV), the Pontifical Institute for Philosophy and Religions in Pune. 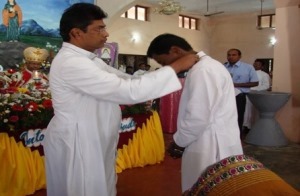 At the time of his Final Profession, Br. Balaraju, a member of the Vicariate of Holy Cross Brothers in India, was already working as the director of the Vicariate’s Abhayadhama Human Development Center in Bangalore. The center serves as a home for children who live on the street, and Br. Balaraju will now continue his work there.