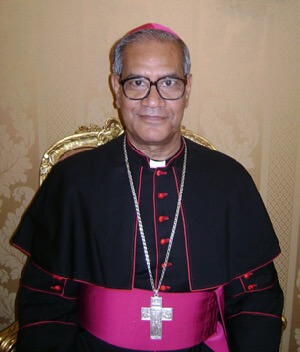 On Sunday, October 9, during the Noon Angelus in St. Peter’s Square, Pope Francis announced that the Most Rev. Patrick D’Rozario, C.S.C., Archbishop of the Archdiocese of Dhaka, Bangladesh, would be one of the 13 new cardinals created at a consistory on November 19. Archbishop D’Rozario becomes the second religious of the Congregation of Holy Cross to be named to the College of Cardinals.

In keeping with Pope Francis’s concern for the world’s peripheries and his desire for a College of Cardinals that reflects the universality of the Church of today, he is also the first Cardinal ever from Bangladesh.

Fr. Robert L. Epping, C.S.C., Superior General of the Congregation, described Archbishop D’Rozario as a “zealous shepherd” whose “graciousness and tenderness is that of a true Shepherd of God's People.”

“This is particularly an honor for Archbishop D'Rozario who has served the Church as Bishop in three different dioceses of Bangladesh, first, as the first bishop of Rajshahi, then as the bishop of Chittagong and, since 2010 when he was made Coadjutor Archbishop of Dhaka and has now been the Archbishop since October 22, 2011,” said Fr. Epping.

“Besides being a personal honor for one of our Congregation, it is a singular honor for the Catholic Church of Bangladesh, since Archbishop D'Rozario is the first Cardinal to be named from Bangladesh, illustrating the importance of the Church there in the Universal Church. It is a special honor, too, for the Congregation of Holy Cross who first sent missionaries to East Bengal in the 1850s,” he continued.

Fr. Epping was on a visit to the Congregation’s birthplace in Le Mans, France, when he received the news of Archbishop D'Rozario’s appointment. He went to the tomb of the Congregation’s founder, Blessed Basile Moreau, to offer special prayers “that God might always protect and sustain him in his new responsibilities to the Holy Father and the whole Church.”

For his part, in an interview with Crux, Archbishop D’Rozario referred to his naming as “a blessing and a grace, and a recognition of the church in Bangladesh.”

Read more of Archbishop D'Rozario's comments on his appointment 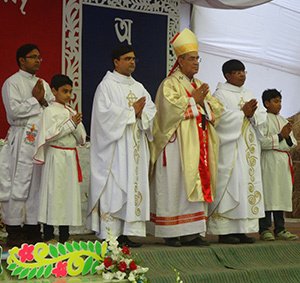 Archbishop D’Rozario, who as born on October 1, 1943, entered the Congregation and professed religious vows in Holy Cross on June 14, 1962. He was ordained a priest ten years later on October 8, 1972. He served for many years in the Congregation’s apostolic and missionary works in Bangladesh.

On September 12, 1990, Archbishop D’Rozario was ordained a bishop, joining the long line of Holy Cross priests who have gone on to serve the Church in Bangladesh as bishops. The Most Rev. Theotonius Amal Ganguly, C.S.C., who has been declared a “Servant of God” as his cause for beatification advances, was the presiding bishop at his Ordination.

Archbishop D’Rozario served as the bishops of the Diocese of Raishahi and the Diocese of Chittagong before being appointed coadjutor of the Archdiocese of Dhaka on November 25, 2010. On October 22, 2011, he succeeded the Most Rev. Paulinus Costa as the Archbishop of Dhaka.

On November 19, he will join John Cardinal O'Hara, C.S.C., Archbishop of Philadelphia in the United States, as one of only two Holy Cross religious who have served the Universal Church in the College of Cardinals. Cardinal O’Hara was made a Cardinal by Pope John XXIII on December 15, 1958.

From the beginning, the work of Holy Cross in East Bengal was marked by crosses, including many deaths due to disease and natural disasters. The Congregation persevered, sending successive generations of missionaries from France and North America. This perseverance bore fruit in the establishment and growth of the local Church, which now celebrates this great honor in one of its own being appointed to serve in the College of Cardinals.