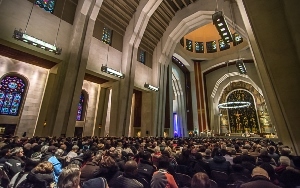 One week ago, on March 19, the Feast of St. Joseph, nearly 8,000 pilgrims participated in one of the 11 Eucharistic Celebrations at the Oratory of St. Joseph in Montreal, Quebec, in Canada. Among those present for the Feast Day was Fr. Richard V. Warner, C.S.C., Superior General of the Congregation. Built under the inspiration of St. André Bessette, the first canonized saint of the Congregation of Holy Cross, the Oratory is the largest shrine in the world to the Husband of Mary and Foster-Father of Jesus.

The original Oratory built by St. André on Mount Royal opened on October 19, 1904, and the first Solemn Mass celebrated there for the Feast of St. Joseph was in 1909. Since these humble beginnings, the celebration on March 19 has become an important experience in the Oratory's life.

View a timeline of the Oratory's history 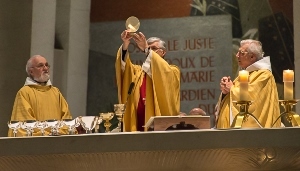 Quickly, the original Oratory proved too small for the throngs of pilgrims who came to visit the "Miracle Man of Montreal", as St. André became known due to the miraculous healing worked through his ministry, and to seek the intercession of St. Joseph. In 1914, the Congregation approved plans to build what would become the present Basilica, which officially opened in 1956.

While over two million pilgrims visit the Oratory each year, the Feast of St. Joseph is one of the busiest days at the Oratory all year. Leading up to the Feast Day, the Oratory celebrates a novena of prayers and Masses beginning on March 10.

Learn more about the Congregation's devotion to St. Joseph 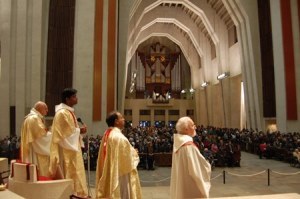 This year, newly ordained Fr. Thomas Gomes, C.S.C., from Bangladesh, celebrated one of the Masses during the novena in the Main Basilica. It was his first Mass in the Basilica since his Ordination on December 28, 2013. Fr. Gomes is one of several international priests of the Congregation who serves the diverse array of pilgraims who come to the Oratory seeking healing and the presence of God. They all work under the direction of Fr. Claude Grou, C.S.C., a former Superior General of the Congregation and the current Rector of the Oratory.

Special thanks to Mr. Michel Archambeault for the pictures.