The 32nd Annual Holy Cross History Conference took place June 13-15. This year’s conference, hosted by the Marianites of Holy Cross, was held at the Cenacle Retreat House in Metairie, a suburb of New Orleans, Louisiana. Forty-four people, including both Holy Cross religious and lay people, participated. 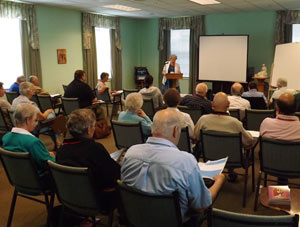 The conference began with the evening of June 13 with dinner and then a welcome by the Chair of the Conference, Sr. Judy Gomila, M.S.C.

Following her remarks, Sr. Clarita Bourque, M.S.C., gave the conference’s first presentation. She recounted vividly the devastation of Hurricane Katrina in the New Orleands area, how the sisters rebounded from the disaster, and how they were able to help others around them and come to the aid of locals traumatized by the devastation.

The second day of the conference, June 14, was full of presentations on Holy Cross persons and history. The day began with Br. John Doran, C.S.C., humorously telling the story of the outstanding scholar, Latinist, administrator and teacher, Br. Edmund Hunt, C.S.C. The history of Holy Cross in Acadia was then presented by Rev. Paul LeBlanc, C.S.C. He traced the educational and pastoral work begun by the first Holy Cross Canadian priest, Rev. Camille Lefebvre, C.S.C., and the Congregation of in the Maritime provinces of Canada.

After the morning break, presentations were given by Sr. Cecile Charette, C.S.C., on the great contribution of Holy Cross, particularly by the sisters, to Catholicism in Western Canada and the Northeastern United States. This was followed by Mr. Jim Schmidt who gave the results of his research on a little-known subject: the student soldiers of the University of Notre Dame during the Civil War. 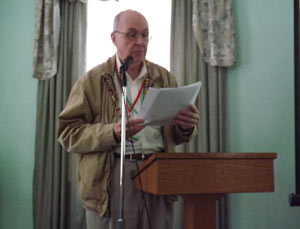 After lunch, Br. George Klawitter, C.S.C., entertained the participants with the story of Br. Theodulus, who worked with the orphans of New Orleans but died young due to yellow fever that took so many lives in 1853 in the city. Sr. Rosemary Wessel, M.S.C., gave an amusing account on St. Agnes School in Jefferson, Louisiana, including its beginnings, its development, and the sisters associated with the school. To close off the afternoon presentations, Rev. Pete Logsdon, C.S.C., gave an overall picture of the developments of Hispanic ministry in Texas and Mexico. The day's liturgy was presided by Rev. Chris Kuhn, C.S.C.

Following dinner, in the evening, Br. Larry Stewart, C.S.C., gave a pictorial overview of the effects of Hurricane Katrina and the flooding in the city. That was followed by the real life and first-hand experience of Br. Walter Gluhm, C.S.C., in surviving Katrina along with his fellow religious.

On Saturday, June 15, organized tours took the conference members to various historical sites of the religious of Holy Cross, both men and women, and various other points of interest in the city. In the evening, all gathered for a dinner hosted by the Marianites at Holy Angels Convent. The evening included some of the local New Orleans flavor, as St. Judy invited a Jazz trio to come and play.