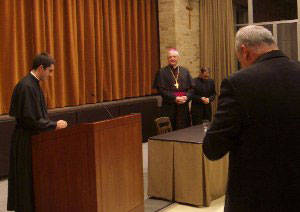 On February 7, the Most Rev. Gerhard L. Müller, the Prefect for the Congregation for the Doctrine of the Faith, visited Moreau Seminary in Notre Dame, Indiana, in the United States. He became the highest-ranking prelate ever to visit the Congregation’s seminary and the University of Notre Dame.

“I invite you to see your time of formation as an invitation from Jesus to spend time in His company,” said the archbishop in his homily at the seminary’s Thursday night community Mass. “That, to my mind, is the essence of seminary formation.

“At the same time, Christ was preparing His friends to carry His Gospel to the whole world; similarly, your formation is geared to prepare you for service outside the walls of Moreau Seminary.”

Quoting from Blessed Basile Moreau, Archbishop Müller singled out the virtue of zeal as essential in sharing the Good News of Christ today. “May your formation give you both the mind and the heart of Christ, so that you will be strong and gentle teachers,” he said. 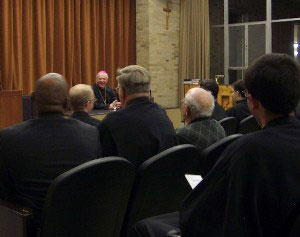 Following Mass, Archbishop Müller joined the Moreau community for dinner, an hour-long question-and-answer session with the seminarians, and then Night Prayer in the Moreau Chapel.

Originally from Mainz, Germany, Müller was previously the Bishop of Regensburg until he was appointed to his new office by Pope Benedict XVI in July 2012. He succeeded William Cardinal Levada as the Prefect of the Congregation. His visit to Moreau Seminary was part of a larger visit to the University of Notre Dame, which included an address to administrators, faculty, and members of the Congregation.