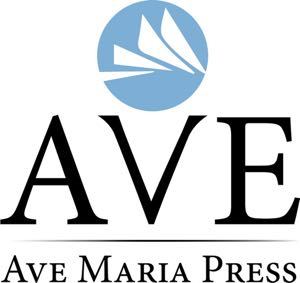 On May 1, 2015, Ave Maria Press, a publishing house founded and ministered by the United States Province of the Congregation of Holy Cross, celebrates its 150th Anniversary. Two events in Notre Dame, Indiana, marked the historic anniversary.

On the afternoon of April 30, an open house was held for the public as well as invited guests at Ave’s newly renovated offices in Notre Dame. A short program given by Fr. Tony Szakaly, C.S.C., the Chairman of the Board of Directors, and Mr. Tom Grady, the Publisher, highlighted the history of Ave, including some of its more influential authors.

Then on May 1, the actual date of Ave’s founding by Fr. Edward Sorin, C.S.C., a Mass and dinner were held at the Congregation’s Moreau Seminary on the campus of the University of Notre Dame.

Ave staff and their spouses, board members past and present, and many Holy Cross sisters, brothers, and priests, including some who have worked for the press over the decades, were in attendance for the celebrations. 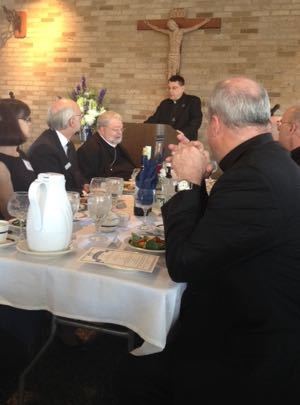 The Most Rev. Kevin C. Rhoades, Bishop of the Diocese of Fort Wayne-South Bend, was the main celebrant and preacher at the Mass. In his homily, Bishop Rhoades drew from the Feast Day of St. Joseph the Worker (May 1) to speak about the value of work, and in particular the work of Ave, in collaborating with and giving glory to God. He ended with the words of St. Paul in his Letter to the Colossians: “Whatever you do, in word or in deed, do everything in the name of the Lord Jesus, giving thanks to God the Father through him.”

The dinner following Mass concluded with a program emceed by Fr. Szakaly, who began by remarking: “This is a day of great joy for the Congregation of Holy Cross as we celebrate the 150th Anniversary of Ave Maria Press. … It is fitting that this anniversary is being celebrated on the Feast of St. Joseph the Worker. St. Joseph is the patron saint of the Holy Cross brothers. These Holy Cross men formed the backbone of the Press for generations, staffing the printing plant and canvassing neighborhoods door to door drumming up subscriptions to Ave Maria Magazine and the Catholic Boy.

“Although there are no longer any Holy Cross religious working at Ave, their spirit lives on in the hard work and dedication of the lay men and women who work at the Press today,” he said.

View a timeline of Ave's history

Fr. Tom O’Hara, C.S.C., the Superior of the United States Province, then offered words of congratulations to Ave and highlighted the incredible work today of lay men and women in continuing this beautiful apostolate that in the Holy Cross tradition and charism works “to make God known, loved, and served.” 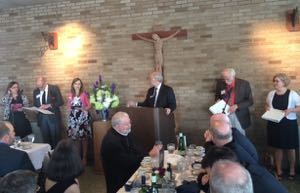 Mr. Grady, after his opening remarks, invited members of the Ave staff to tell with him the history of Ave, which is one of the oldest Catholic publishing houses in the United States. It is also one of the longest-running apostolates in the entire Congregation of Holy Cross. The program delighted those in attendance as it included both poignant and humorous excerpts from The Ave Maria magazine and shared the personal stories behind many of Ave’s most influential publications.

Ave Maria Press was founded by Fr. Sorin with the publication of the first Ave Maria magazine on May 1, 1865, twenty-three years after he founded the University of Notre Dame. Fr. Sorin wanted the magazine to honor the Virgin Mary, focus on Catholic families, and showcase the best American Catholic writing. Many had doubts about whether the publication would survive, but it did for more than a hundred years and at one time was the most popular Catholic magazine in the country.

Although The Ave Maria magazine ceased publication in 1970, the publishing ministry continues to flourish. Today Ave is a leader in publishing Catholic high school religion textbooks, parish resources, and books on prayer and spirituality under the Ave Maria Press, Sorin Books, Forest of Peace, and Christian Classics imprints.

Among Ave’s highly acclaimed and most popular titles are Lisa M. Hendey’s The Handbook for Catholic Moms; The Artist’s Rule by Christine Valters Paintner; Rebuilt by Michael White and Tom Corcoran; A Book of Hours by Thomas Merton; Praying Our Goodbyes by Joyce Rupp; Riding the Dragon by Robert Wicks; Encountering Jesus in the New Testament and This Is Our Faith by Michael Pennock; With Open Hands by Henri Nouwen; and Basil Moreau: Essential Writings, edited by Frs. Kevin Grove, C.S.C., and Andrew Gawrych, C.S.C. 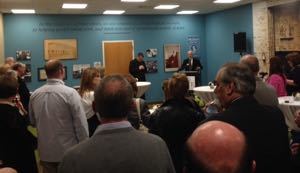 “Planning for our anniversary has given all of us at Ave Maria Press a welcome opportunity to step back from our day-to-day work and reflect on the history and legacy of the wonderful publishing ministry that Fr. Sorin founded 150 years ago during a very different era,” said Mr. Grady. “Fr. Sorin might be mystified by the way we create and distribute our work in a digital era (as I frequently am!), but I hope he would recognize that we have remained faithful to our mission to proclaim the Gospel, serve the spiritual needs of the Church, and join the Congregation of Holy Cross as ‘educators in the faith.’” 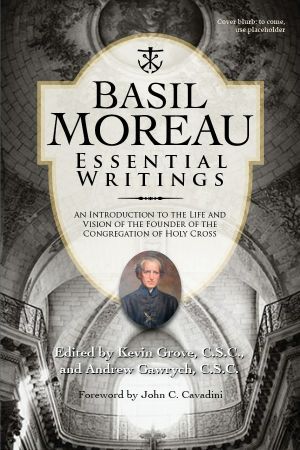 Ave has also taken a lead in spreading the unique spirituality and tradition of the Congregation of Holy Cross through print media.

Beginning with The Cross, Our Only Hope: Daily Reflection in the Holy Cross Tradition, edited by Frs. Grove and Gawrych and published at the end of 2007, Ave has published a collection of books on the Congregation’s charism and history, including biographies of St. André Bessette, Blessed Basile Moreau, and Servant of God Vincent McCauley; spiritual and devotional works, such as The Seven Sorrows of Mary: A Meditative Guide and Praying from the Heart of Holy Cross Spirituality by Br. Joel Giallanza, C.S.C., and You Have Redeemed the World by Frs. Grove and Gawrych; and Congregational texts, like the Directory of Devotional Prayer of the Cognregation of Holy Cross.

Future titles and works on Holy Cross and its charism are already in the works to serve as spiritual and theological resources not only for the Congregation’s many apostolates and collaborators, but also the wider Church and world.

All of this work by Ave—from publishing books in the Holy Cross tradition, to serving as a catechetical leader in high school religious textbooks, to sharing the voices of the religious leaders and spiritual wisdom figures of our day—continues the original vision of Blessed Moreau that Holy Cross would evangelize and educate the world. 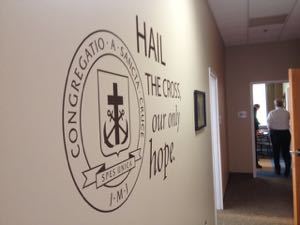 “Tom Grady has made it his mission to breathe the charism of the Congregation of Holy Cross—to educate in the faith—into every aspect of Ave Maria Press,” said Fr. Grove “The result is that we now have a press with hope to bring--from high school textbooks to sacramental resources, reflection books, and many other series in between.”

“As the magazine evolved into Ave Maria Press, this ministry has touched the lives of countless individuals throughout the world who have been privileged to be inspired by the words of some of the best spiritual writers of our time,” said Fr. O’Hara. “In a world where so many search for guidance in their lives or grasp for spiritual insights, Ave Maria Press has become a leader in providing such guidance.”