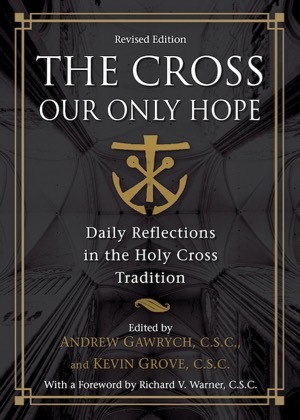 Ave Maria Press recently announced the publication of a revised edition of the best-seller The Cross, Our Only Hope: Daily Meditations in the Holy Cross Tradition. Originally published in 2008, the first edition captured the minds and hearts of many as it helped them to deepen their immersion into and living of the spirituality of Holy Cross.

The first edition appeared on the National Catholic Bestseller List and went on to sell over 13,000 copies. The book featured 366 reflections written by over 200 Holy Cross brothers and priests who drew on their experiences of religious life and ministry in the Congregation. The first edition, as well as this revised edition, were edited by Fr. Kevin Grove, C.S.C., and Fr. Andrew Gawrych, C.S.C.

“The publication of the first edition of The Cross, Our Only Hope in late 2007/early 2008 was a milestone in the life of Ave Maria Press’s understanding of itself as a ministry of the Congregation of Holy Cross, and that book has served as a foundational text in our Holy Cross publishing program,” said Mr. Tom Grady, Publisher of Ave Maria Press. “In its new edition, this wide-ranging book of reflections continues to serve as a place where the men of Holy Cross can speak to one another, articulate what is distinctive about the spiritual vision of the Congregation, and reach out to others as ‘men with hope to bring.’”

“The wonderful part of this second edition is that it is a response to demand,” said Fr. Grove. “I still receive notes from readers at the end of the year saying that they continue to read the reflections and are blessed by the wisdom of so many in Holy Cross.”

Learn more about the Spirituality of Holy Cross

The new edition begins with a new foreword by Fr. Richard V. Warner, C.S.C., Superior General of the Congregation, and continues with a new introduction by the editors that seeks to dive deeper into the Holy Cross tradition: “What holds the spirituality of Holy Cross together? What grounds our mission? How is it of use for all who are trying to follow Jesus in our daily lives?”

Of the 366 daily reflections that follow, over a third of them are new and include over 40 new contributors from around the world, giving the new edition a richer international flavor. It also includes quotations from the Congregation’s first canonized saint, Br. André Bessette, C.S.C., and newly published material from the Congregation’s founder, Blessed Basile Moreau.

“At the same time, in that diversity, there is also a common spirituality and tradition that holds us together and unites as one family in one mission. I find that simply beautiful, because it echoes for me in a very personal way the unity and diversity of each family and of the Church itself. This new edition reflects that reality even more with the inclusion of more brothers and priests from around the world.”

“Working with these religious and their stories, I have been blessed with a glimpse of the joy of the Gospel and its vibrancy in Holy Cross--both the wisdom of those who have devoted much of their lives to ministry as well as the freshness and zeal of those who have just begun,” said Fr. Grove.

In his Preface to the new edition, Fr. Warner, C.S.C., writes: “I am delighted at the publication of this new volume of The Cross, Our Only Hope. The original volume in 2008 by the Congregation of Holy Cross was a significant step which enabled us to share our spirituality and tradition not only with those we minister with and to, but also with Christian believers within the Catholic Church as well as many others. This new volume both dives deeper into our charism through new sources and reveals more of the growing international face of our congregation through new contributors.

“My hope for this volume is that it helps us all—members of Holy Cross and others alike—to answer the call of Pope Francis, the call of Blessed Moreau, and ultimately the call of Jesus himself, that in knowing ever more the love of God for us, we might live and minister among people of many cultures and ways of life in order to proclaim that the Cross of Christ is, indeed, our hope.”

Founded in 1865 by Fr. Edward Sorin, C.S.C., the third Superior General of the Congregation of Holy Cross, Ave Maria Press continues to be a ministry of the United States Provice of Priests and Brothers. Ave Maria is a respected leader in high school religious textbooks and is also well-known for its pastoral materials and books on Catholic spirituality and theology. Beginning with the first edition of The Cross, Our Only Hope, Ave Maria has developed a series of books on the Holy Cross charism, spirituality, and tradition.