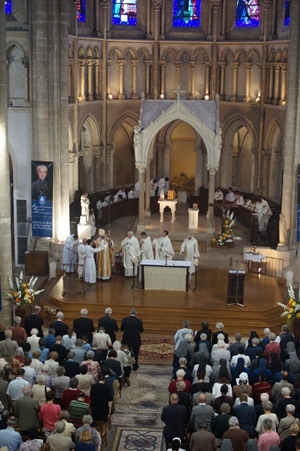 Beautiful celebrations and large crowds marked the inauguration of the International Shrine of Basile Moreau, located at Notre-Dame de Sainte-Croix Church in Le Mans, France. The inaugural events, held the weekend of September 20-21, drew not only Holy Cross religious from around the world to the burial place of their founder, but also many lay men and women from the local church who came to celebrate one of their own.

"The inauguration of the Blessed Basile Moreau shrine in the church of Notre Dame de Sainte Croix, Le Mans, France, was a celebration of the enduring relevance of our founder," said Br. Joel Giallanza, C.S.C., who gave a presentation on the life of Moreau the day of the inauguration. "It was an expression of the pride that the local church of Le Mans has for one of its own, of the appreciation that the Family of Holy Cross has for his exemplary life, and of the devotion that encourages many people to seek his intercession in difficult times. There was much energy and excitement evident among the many people who participated in the inaugural events. And there was an eagerness to learn about Father Moreau and his spiritual legacy."

View a photo gallery of the inauguration

Fr. Richard V. Warner, C.S.C., Superior General of the Congregation of Holy Cross, described the events surrounding the inauguration as "extraordinary" and gave credit to Fr. John DeRiso, C.S.C., the Rector of the Shrine, for "preparing an exceptional weekend for the inauguration of the shrine."

"The attendance at all these events was incredible, exceeding all possible hopes. Many hundreds of people attended these events with a full Church on Sunday afternoon with the Bishop of Le Mans as presider and homilist. The Bishop was laudatory of Holy Cross and went out of his way to express his warm regards and appreciation for Holy Cross," said Fr. Warner.

The prayers and celebrations for the inauguration of the shrine, culminating in the Mass of Inauguration with the Most Rev. Yves Le Saux, Bishop of the Diocese of Le Mans, were modeled after the events that Moreau planned in 1857 for the consecration of Notre-Dame de Sainte-Croix as the Congregation's Conventual Church. As with done with the church's consecration, the preparations for the shrine's inauguration began with a novena of prayers on September 12. 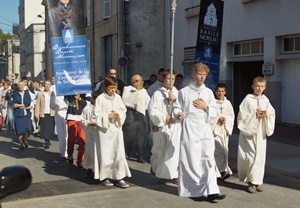 The novena drew to a close on Saturday, September 20. That morning, after Mass in the Cathedral of Saint Julien, the mother church of the Diocese of Le Mans, there was a procession from the cathedral to Notre-Dame de Sainte-Croix Church. A similar procession had been held prior to the consecration of the church in 1857.

The evening of September 20, in Notre-Dame de Sainte-Croix Church, the novena of prayers concluded in spectacular fashion with a concert featuring the instrumental ensemble “Concerts of Le Mans,” under the direction of Dominique Fanal. They performed the symphony “At the Holy Sepulcher” by Vivaldi and the “Stabat Mater” of Pergolèse. Following the concert, there was a full night of Eucharistic Adoration in the church, ending on the morning of September 21 with the celebration of Morning Prayer. Like with the novena and the procession, the night of Adoration drew its inspiration from the events Moreau planned for the consecration of Notre-Dame de Sainte-Croix. 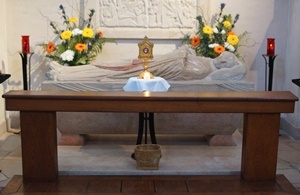 There were also two talks over the weekend, the first delivered by Fr. Jean Proust, C.S.C., and the second by Br. Giallanza, that together dove more deeply into the life and spirituality of Blessed Moreau. Both were well-attended, like the rest of the weekend's events, showing the real thirst among the faithful to learn more about the founder of Holy Cross so they might draw more graces from his life.

Fr. Greg Haake, C.S.C., a Holy Cross priest from the United States who currently lives in Paris, France, while doing doctoral work, was one of the pilgrims able to take in the weekend's events.

"The whole Inauguration weekend was really a marvel," said Fr. Haake. "There were two moments that were particular touching for me. The first was the procession from the Cathedral of St. Julien to Our Lady of Holy Cross. It’s about two kilometers, but we sang and prayed the Rosary while walking processing through the streets of the city. I would say that we were about 200 people processing. In addition, we processed with a relic of Fr. Moreau, and at different times, a priest, a brother, and a sister all had the opportunity to carry it. Beautiful!

"The second moment was during the concert, which was packed. It was at 8 p.m. on Saturday evening. I have never seen that church so beautifully lit. Every column had a little thing hanging from it with four candles. The flowers were gorgeous. The music was equally so. During the 'Stabat Mater' by Pergolesi, one of the parishioners read a little reflection on each of the seven sorrows interspersed throughout. ... It was solemn, holy, magnificent," he said. 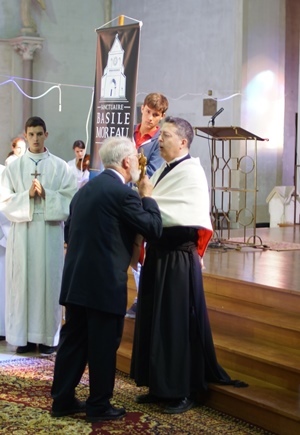 Now, the real work of the shrine in prompting the life and spirituality of Blessed Moreau and the Congregation of Holy Cross begins, as the shrine seeks to welcome pilgrims from near and far into the heart of Holy Cross' origins and heritage.

Read more about the mission of the shrine

"The privilege and the challenge for the Family of Holy Cross will be to develop means for building upon that energy and excitement and eagerness so the shrine truly becomes a place for people from around the world to visit for prayer, encouragement, comfort, and nourishment for their spiritual life," said Br. Giallanza.