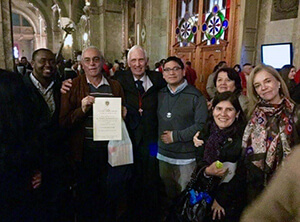 On Sunday, July 24, Cardinal Ricardo Ezzati, Archbishop of Santiago, presented Br. Donald Kuchenmeister, C.S.C., with the Condecoración Cruz Apóstol Santiago (Cross of St. James Award) for his significant contributions over three decades to the Archdiocese and its social work. The presentation came during the noon Mass at the Cathedral on the Eve of the Feast of St. James the Apostle, the namesake and patron saint of the Chilean capital.

Br. Kuchenmeister is the first religious brother to receive this prestigious award. He is also the first member of the Congregation to be so honored by the Catholic Church in Chile.

“This award is a recognition of the work that one of our religious has done for years in the children’s homes of the Congregation,” said Fr. José Ahumada, C.S.C., Superior of the District of Chile. “His simplicity and generosity represent the desire to serve Christ as a consecrated brother in the Chilean Church.”

With a degree in social work and previous experience working at Boysville, a Center of Rehabilitation for young men in Michigan in the United States, Br. Kuchenmeister arrived in Chile in 1983 to assist with the Congregation’s children’s home in Talagante, known as Hogar de Niños San José. At the time, Hogar San José was a typical large, institutional orphanage housing over 150 children in dormitories of 25-30 children. 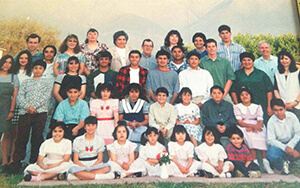 Br. Kuchenmeister began to dream of a children’s home that was smaller and had more of a familial feel. Together with two other Holy Cross brothers, Ricardo MacDonald, C.S.C., and Br. Donald Naseau, C.S.C., he helped found Hogar Santa Cruz in the Peñalolén neighborhood of Santiago. It had smaller bedrooms for the children and housed only 30 children. Br. Kuchenmeister would go on to serve 15 years as the Hogar’s Director, helping form many young boys and girls over those years.

After a sabbatical year in 2001 in which he went to culinary school in the United States, Br. Kuchenmeister returned to Chile in 2002. A good chef from even before his culinary studies, Br. Kuchenmeister put his enhanced cooking skills to use giving cooking classes and starting a Meals on Wheels Program in San Roque Parish in Peñalolén to serve the sick and the homebound. He raised money for his programs by cooking bread and cookies for sale. 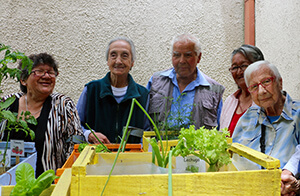 Largely through his work through the Meals on Wheels Program, Br. Kuchenmeister came to discover the growing number of senior citizens in Chile who live alone with little support from the state. Taking the creative initiative once again, Br. Kuchenmeister started a day program and center for senior citizens in San Roque parish called “La Fuente”. The program has a familial feel and provides not only meals but a variety of different activities every day.

Learn about the mission of Holy Cross

Br. Kuchenmeister accepted the award with his characteristic humility.

“This presentation gives me a formal medium to be able to say thanks to who everyone with whom I have had the privilege of living and working during my time here in Chile,” said Br. Kuchenmeister. “This also includes my deepest gratitude to the Congregation of Holy Cross for allowing me to come and stay in Chile. 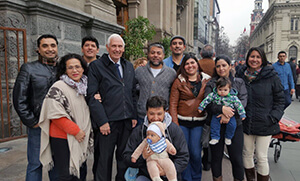 “It also includes the youth and personal in Hogar San José and Hogar Santa Cruz for putting up with me and teaching me so much. I am grateful to the priests and laypeople connected to San Roque for their generosity and finally to the administration, students, teachers, parents, and graduates of St. George’s College. They not only help us in our work in the parish with the elderly, but also have been very generous in supporting our apostolate in Hogar Santa Cruz where I lived for 15 years.”