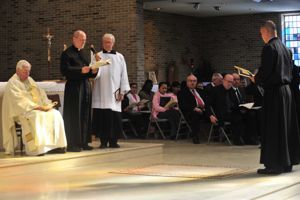 Last Saturday, February 15, Br. Nich J. Perez, C.S.C., made his Profession of Final Vows as a religious brother of the Congregation of Holy Cross. The Final Vows Mass was held in St. Joseph Chapel at Holy Cross College in Notre Dame, Indiana, in the United States.

Fr. Richard V. Warner, C.S.C., the Superior General of the Congregation, presided and preached at the Mass, which in addition to members of Br. Nich’s family and a large crowd of Holy Cross sisters, brothers, and priests included many members of the college and local communities.

Read the Constitutions of Congregation of Holy Cross 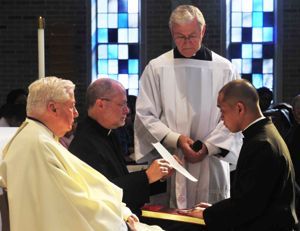 In his homily, Fr. Warner spoke of the “intimate” connection between religious profession and the Sacrament of Baptism.

“Few of us remember that moment when we were signed with the cross of our Lord and Savior Jesus Christ on our forehead and claimed by Him forever in a special relationship of unity, love that is unbreakable – unbreakable at least from His perspective,” preached Fr. Warner. “At that moment, Jesus Christ claimed us for himself. He claimed us as His own. He brought us into his Church with everything he alone could and willingly offers us.

“And yet many of the men and women here this afternoon commit ourselves to take this Baptismal promise and relationship to a deeper level and in a public way. As religious, by the public profession of our vows, we make a public commitment, to live this Baptismal commitment in a deeper way by committing ourselves to one another and to God in a permanent and public way.”

Quoting from the Constitutions of the Congregation of Holy Cross, Fr. Warner spoke of how while religious sisters, brothers, and priests “pronounce our vows in a moment, we live them throughout our lives.”

“Yet like the Apostle Paul, whatever successes we experience in our ministry, however blessed we are to work closely with others, our goal is to know Jesus,” he said. “The act of love for God which a religious profession represents, enables us to deepen our love for Christ and to believe in the power of the resurrection if we share his life and death. We all share a call to holiness. It is our cooperation with God’s grace that makes this a possibility for us if we persevere in the graces that are ours.”

A reception followed the Mass in the student lounge of Holy Cross College. Later in the evening, a dinner was held in Br. Nich’s honor at the Gillespie Conference Center in South Bend, Indiana.

Read the vocation stories of Holy Cross brothers and priests 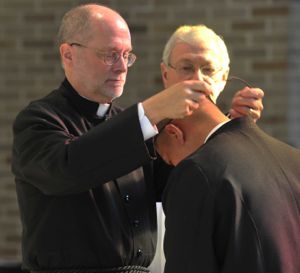 Originally from Bacolod City in the Philippines, Br. Nich is a graduate of the University of St. La Salle (Philippines) and St. Mary's University in San Antonio, Texas, where he earned a Master's Degree in Communications, specializing in Media Studies and Film. He currently is a member of the Communications Faculty of Holy Cross College. Known for his film making talents, Br. Nich has been working most recently on a documentary about the religious brothers’ vocation.