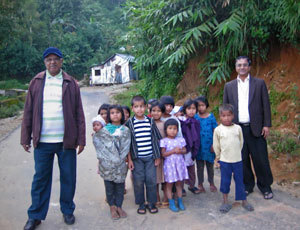 A couple of unfamiliar villagers came running to me one day when I was the assistant pastor in one of our Holy Cross parishes in North East India. They told me they were Presbyterians. In an air of urgency, they requested the service of our jeep to take to hospital a woman about to give birth to a baby. The hospital was about an hour-and-half drive away in Shillong, and the day was a road-block day, called by some politicians.

After some thoughts on the risks involved, I asked our driver to take the patient to the hospital. I sat in front with my white cassock on – as a sign of peace and in case some stones were thrown at the vehicle, I should be the first recipient! The pregnant woman was brought to the jeep in a specially made basket, carried by her husband from the village on his back, and brought to the mission and made to sit on the back seat of the jeep.

On the way to hospital, I went to two police stations by the roadside to ask for security, but they flatly rejected my plea. I could hear the wailing and writhing of the woman in delivery pains. Thankfully, without any dangerous incidents, the woman was admitted to a hospital of her liking. After a few months, the woman brought her son to the mission along with a rooster for a thanksgiving celebration. 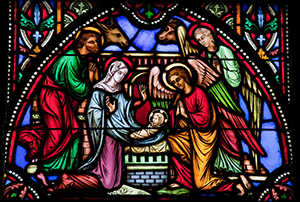 The above incident is a kind of Christmas, which is about the birth a child in a family, except that the divine child could not be born in a home of his own and receive even a minimum of security, protection, and care, such as an ordinary child would normally receive. Both Joseph and Mary were poor and when they came to the town of Bethlehem, no one took any notice of their coming and no one helped them to find a shelter in which to stay. Since the only shelter they could get was a stable, it was in a stable that the baby was born. There was no room for them in the rude village inn, and nothing to do then but to find a corner in a stable where Mary could come to rest.

The crowded inn of the story becomes also an eternal parable of the human soul. The inn was actually crowded, and there was no deliberate, preplanned rejection of the visitors from Nazareth. In a similar way Jesus is excluded from the inn of our hearts, not through any particularly hostile will, but through the near drift of circumstances. We have merely filled all the space we have with other “guests.”

In this world with its noisy and demanding clamor, the crowd of common thoughts and common interests has poured in upon us and taken possession of our time and attention to the point that when Christ comes with His infinite gift for the enrichment of our souls, there is no room for Him in the inn. Neither the inn-keeper, nor others around, had any awareness of the identity of the child being born or of the parents. This is the way at all times. We never know when the great possibilities of God are at our doors, unless we have taken pains to keep our spirits sensitive.

The great prophet Isaiah proclaimed an earth-breaking good news: “The people that walked in darkness have seen a great light; on those who live in a land of deep shadow a light has shined” (9:1) The situations in the world of today are not much different from those at the time of the prophet. Various factors that contribute to darkness in the lives of people remain very much alive. There is war, famine, addiction to drugs and alcohol, rampant cruelty, violence, promiscuity, and corruption. Selfish pleasure and godlessness continue to be the order of the day. 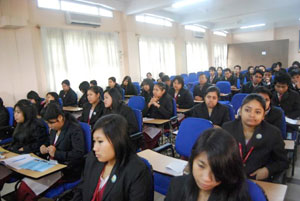 Many such elements entangle the people we serve as to make them feel hopeless and helpless. Our students and other young people have become slavish to many inducements and poisonous attractions such as premarital sex, Internet illusions, and other communication gadgets. Many mothers spend sleepless nights and shed painful tears for the sake of their beloved sons and daughters, the apples of their eyes.

Such are the “yokes weighing on them.” The Lord of Christmas has come to liberate them all from these powers of darkness, and he would break down “the yoke that was weighing on them and the bars across their shoulders, the rod of the oppressors” (Isaiah  9: 3-4). In His public announcement of His mission, Jesus states emphatically that “He has sent me to bring the good news to the poor and to proclaim liberty to captives” (Luke 4:18).

As disciples of Christ and members of Holy Cross congregation, we seek to carry on the same legacy of ministering for all works of liberation. Our Constitution on Mission states clearly that ours is the same mission as that of the Lord. Without any self-righteousness or prejudiced judgment, we empathetically “reach out to the afflicted and in a preferential way, to the poor and the oppressed. We come not just servants but as their neighbors, to be with them and of them” (2:13).

Today Christmas is to be a bridge between the world as it is and the world as it should be. What is good news for people of open heart, listening ears, and upturned eyes is bad news for those who sense only empty words. They do not feel the heartbeat of the message that could pulsate life into them; such people go on their way sad and unconverted. 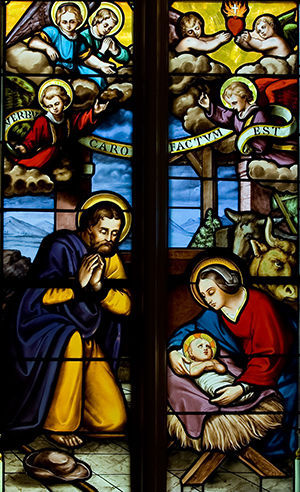 Today, as a result of commerce and materialism, the whole world’s mind has unconsciously been taken away from the significance of Christmas. Christmas means more than business and commerce. We are losing the true meaning of Christmas. It is still not too late for us to search and discover it. The life of Christ teaches us the need to give and to show love. The solution to all the problems in this sin-infested world can be summed up in one reality called love.

The birth of Christ symbolizes peace and joy to the world. One of His names is Prince of Peace. At this season, He promises peace of mind and heart. The unique truth of Christmas is that the Word was made flesh and dwelt among us. The unique outcome was that this marked the beginning of a new creation, a possible rebirth of humanity. God, through His Son, entered into our human life that we, believing in Him, might receive power to become children of God. The baby who had no cradle but a manger, became the one Lord and Savior of mankind! Christianity is not a creed to be recited but a new life to be lived in Christ.

God comes as the simplest of the simple, the poorest of the poor. He reveals His identity first to the uncouth and rustic shepherds. It was to very ordinary people that God’s message first came. They were the kind of people that the elite in Israel despised, because they could not afford to follow all the meticulous regulations of the rabbis. The kind of works they did prevented them from doing so. They were the marginal people.

One needs not go searching for God anywhere far. “The poor are always with you,” and God is among the poor. Unless we become little ones, we can neither understand nor enter the kingdom of God. This apparent paradox will be acknowledged by Jesus in the following words: “Father, Lord of heaven and earth, I thank you because you have shown to the unlearned what you have hidden from the wise and learned” (Matt 11:25).

One needs to be simple and humble to bend low to enter into the manger and recognize God’s own Son, wrapped in swaddling clothes! The manger had become a contemplation cell as for Mary and others who heard what the shepherds said about the Child: “All who heard it were amazed … Mary remembered all these things and thought deeply about them” (Luke 2:18).

When the reality of Christ is at our door, what may be the signs of his presence? In the first place, the note of his coming will be joy. When anything happens in life that is or might be joyous, then we need to understand that the reality of Jesus may be coming near. This may happen when love has come to a man and a woman, or some great friendship has begun, or new opportunities offer in a job give happier self-expression than has been known before. The message of the angel of the Lord to the shepherds contained this basic quality: “Don’t be afraid! Listen, I bring you news of great joy, a joy to be shared by the whole people” (Luke 2:11).

Secondly, the sign that Jesus may be near us is, when we stand in the presence of innocence. We live in an environment which leads us to cynicism and uncertainty about even the existence of uncontaminated purity of motive and an unspoiled heart. We can still look for purity of intentions and innocence of heart in such acts and attitudes of the faithfulness of mothers to their little children, the capacity of innumerable people to suffer for the sake of those they love, the integrity of human persons which makes them forgo advantages in business or other ways of living, and the idealism of young people, which wants to keep a cleanness of their hearts.

Christmas is a declaration that God is not only almighty and all-sufficient, but He is God-with-us, God the near, the understanding, and the intimate. The eternal God coming down into human life, the infinite entering into human expression at a particular point of time is a stupendous theme. The letter to the Galatians expresses this aptly: “When the appointed time came, God sent his Son, born of a woman, born a subject of the Law” (Gal 4:4-5).

The child born for us, the son given to us is born for the sake of the whole world as well as every individual person. The great reality is the awareness that there is a Savior, who is our empathetic High Priest who is capable of feeling our weaknesses with us. Hence there is no reason for anyone to lose hope in life, however hopeless his situations might be (Hebrews 4: 14-16).