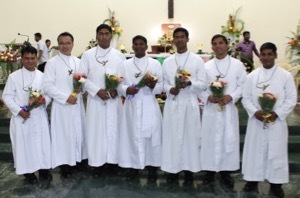 On Friday, February 5, 2016, the Congregation of Holy Cross in India celebrated the Final Professions of seven seminarians. The theme of the celebration was “Rooted in Christ to Give Christ.” The following day, all seven were ordained to the diaconate by the Most Rev. Valerian D’Souza, Bishop Emeritus of Diocese of Poona.

"The perpetual profession and ordination to diaconate of seven of our men indeed calls for thanks giving and rejoicing in our communities in India and the Congregation at large," said Fr. Abraham Kochupurackal, C.S.C., Superior of the Province of North East India. "At the end of the year which was dedicated to consecrated life in the Church, our Congregation in India is blessed with their resolve to dedicate fully and forever their lives to God, to be rooted in Christ, and to be prophetic sings of God's compassion in the world.

"They are tangible marks of Divine Providence and Guidance of our congregation. God is blessing us and beckoning us to remain close to His designs for us," he said. 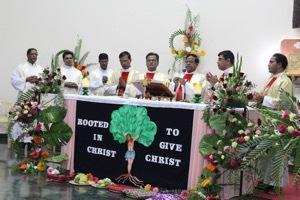 Mass of Final Profession was held at Christ the King Church, Sainikwadi, Pune, a parish administered by the Congregation. Fr. Leo D’Souza presided, while Fr. Kochupurackal preached. In his homily, Fr. Kochupurackal explained to the seven men the meaning of the three evangelical counsels and the demands and rewards of living them faithfully.

All seven were ordained deacons the following day in a Mass at the Chapel of Papal Seminary in Pune. Bishop Valerian D’Souza stressed to the men being ordained the absolute importance of prayer in their lives. He also exhorted them to render service with love and mercy.

Both celebrations were well attended by the family members of the seven, their friends, other well-wishers, and several Holy Cross religious from across India. 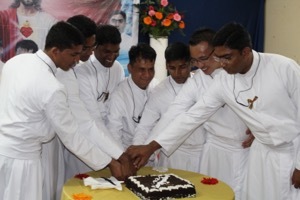 Six of the seven new deacons will continue their studies in theology until September 2016. The seventh, Deacon Vijayakanth, has already completed his studies last year. He will assigned to serve in the Congregation’s mission.

“These seven new deacons will participate and contribute with their creative mind and missionary zeal to take forward the mission of the Congregation,” said Fr. Kochupurackal. Our future is hope-filled; the local Church is blessed! We assure them our fraternal love and support; we pray for the grace of perseverance and fidelity.”