Today, October 17, 2013, marked the third anniversary of the canonization of St. André Bessette, the first canonized saint in the Congregation of Holy Cross. After being beatified by Blessed John Paul II on May 23, 1982, this humble brother was canonized in St. Peter’s Square by Benedict XVI on October 17, 2010. Celebrations marking the anniversary are taking place in the Congregation's apostolates around the world. 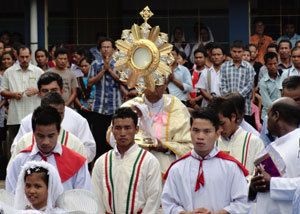 St. André Bessette Parish in Bodhjungnagar, Northeast India, celebrated its patron on Sunday, October 13. Despite the havoc and confusion caused by the impact of super cyclone Phailin, the parish witnessed a great gathering of over three thousand people. This year, the parish's celebration included hosting the annual Eucharistic Procession of the Diocese of Agartala. Most Rev. Lumen Monteiro, C.S.C., Bishop of Agartala, presided at the celebratory Mass.

In his homily, Bishop Lumen highlighted St. André's humility, his joyful service, and his devotion to St. Joseph. “In this year of faith let us root ourselves in the Eucharistic Lord and serve one another by the strength of our faith."

St. André Bessette Church in Portland, Oregon, was the first Roman Catholic church in the United States to be named for the "Miracle Man of Montreal." Today, it marks the third anniversary of the canonization of its patron with a "Renovation Hard Hat Party". The event allows guests to see the progress of its current capital project, called "The Open Doors Campaign", to improve its facilities in service of those surviving urban poverty in downtown Portland.

At Sacred Heart Church in Colorado Springs, Colorado, in the United States, the parish is showing God's Doorkeeper, the Salt + Light Television documentary made for his canonization, following its daily Mass today. The priests also spoke about St. André during the weekend Masses on October 12 and 13.

“St. André continues to inspire me in our pastoral approach in listening and being with those who suffer, especially when we cannot control or change people’s pain," said Rev. Ron Raab, C.S.C., pastor of the parish. "Through his intercession, we depend on a new life for all of us in Christ Jesus.”

Those are just three of the many celebrations taking place around the world in honor of this anniversary. 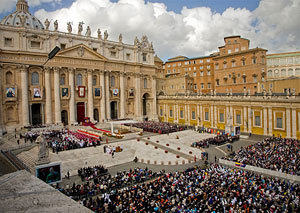 In his homily at the Mass of Canonization, Benedict XVI said, "Brother André Bessette, born in Quebec, in Canada, and a religious of the Congregation of the Holy Cross, knew suffering and poverty very early in life. This led him to turn to God for prayer and intense interior life. The doorman at the Notre Dame College in Montreal, he showed boundless charity and did everything possible to soothe the despair of those who confided in him. With little instruction, he nevertheless understood what was essential to his faith. For him, to believe meant to submit freely and lovingly to Divine Will. Everything existed through the mystery of Jesus, he lived the beatitude of the pure of heart, that of personal rectitude. It is thanks to this simplicity, he showed many God.

"He had the Saint Joseph Oratory of Mount Royal built, where he was the faithful guardian until his death in 1937. There, he was the witness to many healings and conversions. “Do not try to have your trials taken away from you”, he said, “rather, ask for the grace to endure them well”. For him, everything spoke of God and His presence. May we, following his example, search for God with simplicity to discover Him always present in the core of our lives! May the example of Brother André inspire Canadian Christian life!"