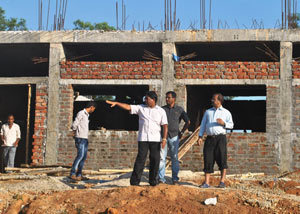 Construction continues as planned at two of colleges of the Congregation of Holy Cross in India and Bangladesh.

Holy Cross College in Agartala, India, was established in August 2009 to provide the Congregation’s holistic and rigorous education to post-secondary students, especially from among the tribal peoples, in Northeast India. Affiliated with Tripura University (Central University), Holy Cross College is both the only Catholic college and the only English-medium college in the state of Tripura.

Learn more about the mission of the Congregation 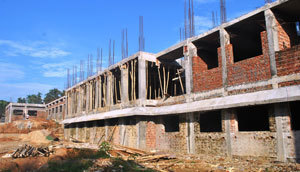 Since its founding, Holy Cross College has borrowed classrooms, labs, and administrative space from Holy Cross School in Durjoynahar, a primary and secondary school run by the Congregation. On December 12, 2012, Bishop Lumen Monteiro, the Bishop of the Diocese of Agartala, blessed the foundation stone for a new building that will give the College its first permanent home. Many members of the Congregation, as well as its lay collaborators, were present at that ceremony.

Phase one includes construction of the basement and most of the ground floor of what eventually will be a 65,000 sq. ft., three-story building with the basement and upper terrace. The first phase will provide the college with almost 21,000 sq. ft. of space for nine classrooms as well as a laboratory, library, reading room, administrative office, staff room, seminar hall, and rest rooms. It is set to be inaugurated in January 2014. 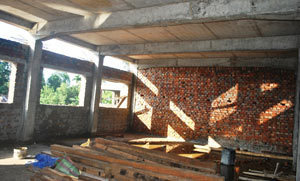 “Holy Cross College would play a vital role in the enhancement of the intellectuals and trained persons in the region and will develop required human resources for the various sectors,” said Fr. Emmanuel Kallarackal, C.S.C., the Principal of the College.

“With the establishment of Holy Cross College, a quality English Medium institution of higher learning, HCEF hopes that the talented students will remain in the state which will induce progress and development of the state.”

To date, Holy Cross College, Agartala, has followed in the footsteps of other Holy Cross educational institutions across the world, gradually gaining recognition for its excellence. Professor Arunodaya Saha, former Vice – Chancellor of Tripura University, said, “Out of all the colleges affiliated to the University, Holy Cross stands apart in its discipline and excellence in performance.”

Discover the Congregation's charism as educators in the faith 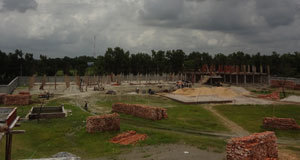 Meanwhile, construction also continues on pace for the Congregation's new college in Mymensingh, Bangladesh. Named Notre Dame College, the school would be the first Catholic college in the Diocese of Mymensingh. The foundation stone for the college was laid on March 1, 2013. Most Rev. Joseph Marino, who was the Apostolic Nuncio to Bangladesh at the time of the laying of the cornerstone, presided at the ceremony.

Although the Diocese of Mymensingh was only founded in 1987, the presence of the Catholic Church among the tribal peoples of the region, who are known as both “Garo” and “Mandi,” dates back over 100 years. In 1910, Holy Cross religious, who began working in East Bengal since 1853, established the first Catholic mission among the Garo people. The Diocese has many primary schools and high schools, but it is lacking a college so that the Garos could continue their education. As a result, several years ago, the Bishop of Mymensingh approached the Congregation to found a college in the Diocese. 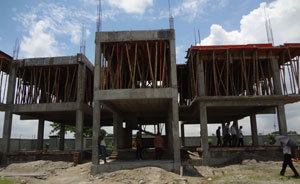 The plans for Notre Dame College Mymensingh eventually call for a five-story building. This first phase of construction will complete the first two floors as well as the residence building.