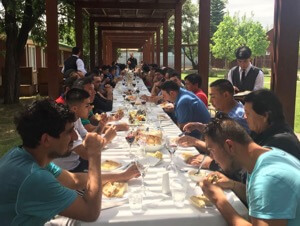 On Friday, October 21, the Congregation’s District of Chile celebrated “Tijerales” with the construction workers who are building the new house of formation. A Chilean tradition, Tijerales is a celebration that marks the completion of the “obra gruesa” or the structural phase of construction. The party is hosted by the owner of the house as a way to thank the workers.

Joining the members of the House of Formation in hosting the workers for the Tijerales were Fr. Pepe Ahumada, C.S.C., Superior of the District of Chile, and the District Council. Also present were the architects and engineers who are overseeing the project.

“It is a joy to see how this building, which will be so significant for future generations of Holy Cross religious, is rising from the ground,” said Fr. Ahumada. “We hope, as it says in the Gospels, that the whole building is assembled in Christ Jesus, and that the young who will live in this house feel the presence of the Lord who is asking them to be good disciples of his, in order to announce his kingdom.”

“The care that the workers are putting into the new construction is a sign that the love of Christ is very alive in this place,” he added. 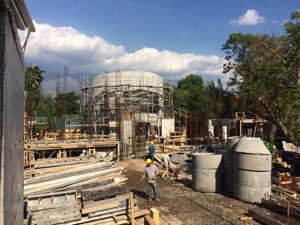 Three days later, on Monday, October 24, Fr. Andrew Gawrych, C.S.C., the Director of the Santa Cruz House of Formation, celebrated the first Mass in the still unfinished chapel. The Mass was held during the workers’ lunch break, and well over 30 of them attended.

The Santa Cruz House of Formation receives men in formation after the Novitiate from Brazil, Chile, Haiti, Mexico, and Peru. The new house sits on the site of the old one in the Peñalolén neighborhood of the Chilean capital. The same property is also home to the District’s headquarters, the District’s retirement home, and the central office of Fundamor, the Congregation’s outreach to vulnerable children. It is also within the boundaries of San Roque Parish, which was founded by and continues to be administered by the Congregation. 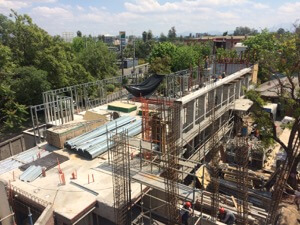 The new house will have 20 rooms for men in formation, four rooms for staff and other finally professed religious, and two guests rooms. The bulk of the building’s space is dedicated to the communal areas, including the chapel, library, kitchen, dining room, community room, classrooms, and conference room.

While the structural work is nearing completion on the project, there is still much work that remains. The tentative date for the inauguration and dedication of the new Santa Cruz House of Formation has been set for May 20, 2017.

Read about the new McCauley House of Formation 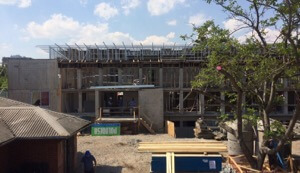 “Much more importantly than new buildings is the confidence we place in the young men who live in those buildings,” added Fr. O’Hara. “For they truly represent the future not just of Holy Cross but the Universal Church.”