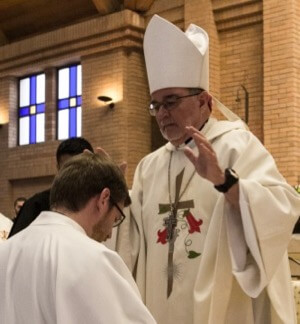 On Saturday, September 15, the Feast Day of the Congregation of Holy Cross’s Patroness, Our Lady of Sorrows, Mr. Michael Thomas, C.S.C., was ordained to the Deaconate at San Francisco de Sales Parish in Santiago, Chile. The Most Rev. Arthur J. Colgan, C.S.C., Auxiliary Bishop of the Diocese of Chosica, Peru, was the presiding and ordaining bishop.

A member of the United States Province of Priests and Brothers, Mr. Thomas professed his Final Vows in the Congregation on August 25 along with four other seminarians of the Province: Mr. Brian Kennedy, C.S.C., Mr. Karl Romkema Jr., C.S.C., Mr. Brogan Ryan, C.S.C., and Mr. Bryan Williams, C.S.C. The Mass was held in the Basilica of the Sacred Heart on the campus of the University of Notre Dame, in Notre Dame, Indiana.

Mr. Thomas was not ordained with his classmates because he and the Province’s leadership had decided that he would be ordained in Chile, where he has been assigned to work at St. George’s College. The hope was that the celebration would be a sign of grace and hope for the Catholic Church in Chile, which has been going through a time of trial and suffering. 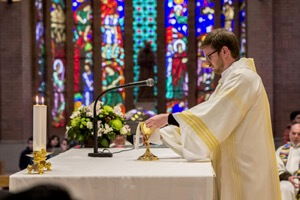 Despite it being a holiday weekend in Chile, the Ordination Mass drew a good crowd of faculty, staff, administrators, and families from St. George’s College. There were also a number of the lay faithful from the Congregation’s other apostolates in Chile, who joined with the Holy Cross priests, brothers, sisters, and men in formation in the celebration. Fr. José Ahumada, C.S.C, Superior of the District of Chile, formally presented Mr. Thomas to Bishop Colgan for Ordination.

In the reception following the Mass, all spoke of their gratitude to the Congregation for having assigned a deacon to Chile and for having given the community the chance to celebrate the Deaconate Ordination. The joy and the hope for the local community were clearly evident, particularly as the Holy Cross family in Chile prepares to celebrate later this month the Congregation's 75th Anniversary in the country. 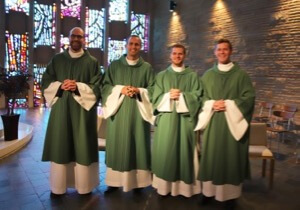 Like Deacon Thomas, who continues his ministry at St. George’s College, the other four deacons of the United States Province are in full-time ministry assignments. Deacon Kennedy is working at St. John Vianney Parish in Goodyear, Arizona. Deacon Ryan is serving at St. Ignatius Martyr Parish in Austin, Texas. Deacon Ryan is the Rector of Keough Hall at the University of Notre Dame. Deacon Williams is working in Campus and Residence Hall Ministry at Stonehill College in Easton, Massachusetts.