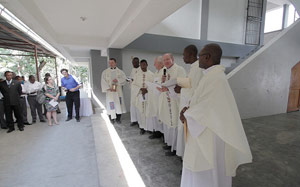 On Saturday, January 19, 2013, just over three years after the day that the devastating earthquake shook Haiti, the Congregation of Holy Cross gathered to celebrate the dedication of Ensemble Scolaire Père Basile Moreau in Port-au-Prince.

The 2010 earthquake had completely destroyed the secondary school and significantly damaged the primary school, requiring it to undergo major renovations. For the past three years, classes at the primary and secondary levels have been held in UNESCO tents while the new buildings were being constructed.

Despite having to weather those poor conditions, Basile Moreau School continued its record of academic excellence. For the past five years, our primary and secondary schools have scored with the highest results in their respective groupings.

Read about the Congregation's efforts to improve secondary teaching in Haiti 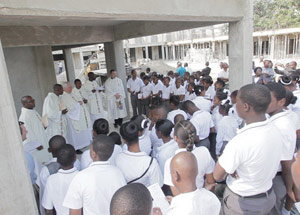 Presiding at the Mass of Dedication was Bishop Simon Saint-Hillien, the Bishop of Hinche, who as a Holy Cross priest founded the school in the late 1980s.The bilingual homily was given by Rev. Tim Scully, C.S.C., the Director of University of Notre Dame’s Institute for Educational Initiatives, and Rev. Michel Eugène, C.S.C., the Superior of the Congregation’s Province of Our Lady of Perpetual Help (Haiti).

Following the Mass, Rev. Richard V. Warner, C.S.C., the Superior General of the Congregation of Holy Cross, led the blessing of the buildings. The jubilant celebration included songs and testimonials from students, parents, teachers, and members of the Congregation. 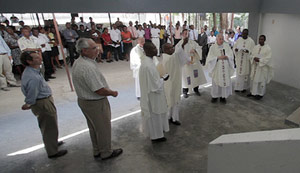 The new, state-of-the-art buildings, built to withstand earthquakes and hurricanes, were made possible through the generosity of many friends of Holy Cross as well as the Congregation’s schools and parishes from around the world who contributed.

Special thanks to the Alliance for Catholic Education at the University of Notre Dame in Notre Dame, Indiana, in the United States, for contributing to this story.