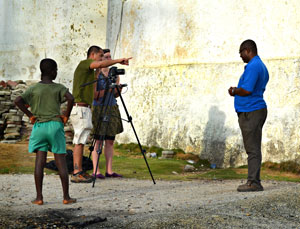 These past two weeks Br. Nich Perez, C.S.C., has been filming the Holy Cross brothers at Columba Hall, Schubert Hall, and Holy Cross Village in Notre Dame, Indiana. The footage is for his feature-length documentary on the vocation of religious brothers, entitled BRO: Men with Hope to Bring.

“BRO is for all audiences, catering to people who are searching for meaning, people from any race or religion who can understand the language of human condition and hope. It is a film about the brothers made by a brother,” said Br. Perez.

Watch the "Kickstarter" trailer of the documentary

Although many Holy Cross brothers are featured in the 90-minute documentary, BRO: Men with Hope to Bring is not just about brothers in the Congregation. More broadly, it is about the wider vocation of religious brothers in the Church, a vocation the documentary’s trailer characterizes as “the best-kept secret of the Catholic Church.”

“This is not just about the brothers of Holy Cross,” said Br. Perez, “but it is focused on the vocation of the brothers, and I am using some practical examples of Holy Cross brothers around the world, with interviews from different religious orders and theologians. Our approach is telling their stories of hope and showing how human they are without sugar coating. We don't want to make it sound like a vocation propaganda but a study of human condition, specifically geared towards the secular audience.”

Check out the “Kickstarter” page that tells more about the project 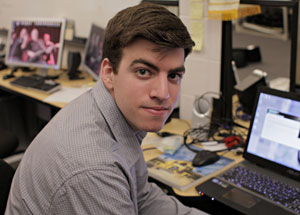 Br. Perez is the writer, director, and editor of the documentary. Assisting him on the crew for the project are Chelsea Crane (Producer) and Jeff Kyle (Motion Graphics and Associate Producer), both of whom are graduates of Holy Cross institutions. Crane graduated from Saint Mary’s College in Notre Dame, Indiana, and Kyle is a graduate of Holy Cross College in Notre Dame, Indiana.

Contributing the musical score to the project are one recent graduate, Karam Salem, and two seniors, Khiry-Jurrell Hollowelll and Shawn Tallet, from Holy Cross College, where Br. Perez serves on the faculty.

The crew’s goal is to submit the documentary to film festivals, including Sundance and SXWX. Although they admit it is an “ambitious” goal, it is part of their hope to share the story of religious brothers in the Catholic Church with a wider audience.

“In my seven years as a temporarily professed religious brother, and the youngest Holy Cross Brother in the United States of America, it has always been my mission to get this word out,” said Br. Perez, who is a member of the Moreau Province, which has been one of the financial backers of the project. “The men that I have met and lived with for the past few years are exceptional human beings who have given their lives for something that is true and honorable. Their inspiring stories have been my impetus to make this film. 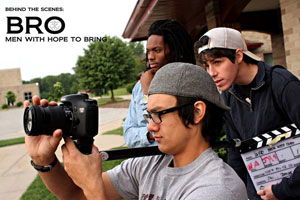 “To let the people of the world understand why we exist and why the mission of bringing hope to others is important, especially in this very unique lifestyle as vowed religious working and living with the people.”

Following this week of filming, Br. Perez and the crew are moving on to more filming in Chicago, Detroit, Austin, San Antonio, and then New Orleans. Their hope is to complete the first cut of the film by October and then have a final cut done by December in order to be ready to submit to the 2014 film festivals.