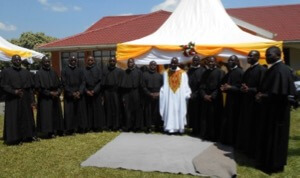 July 16, 2018, was a day of great grace and overflowing joy at the Holy Cross Novitiate at Lake Saaka in Fort Portal, Uganda. Twelve novices, 11 for the Society of Priests and one for the Society of Brothers, made their First Profession of Religious Vows. They had completed their canonical Novitiate year under the accompaniment and guidance of their formation staff: Fr. Tom Smith, C.S.C., Novice Master, and Br. Everest Neema, C.S.C., Assistant Novice Master.

“These twelve newly-professed disciples are ‘men with hope to bring’ not only to the Church and the Congregation as a whole but in particular to Holy Cross in East Africa," said Fr. Smith. "During their novitiate they have demonstrated an impressive commitment to growing in prayer, to learning the give and take required to be brothers in community, and to overcoming fears and developing skills for service to the people.

"It is with much satisfaction and joy that I welcome them as my vowed brothers in Holy Cross.” 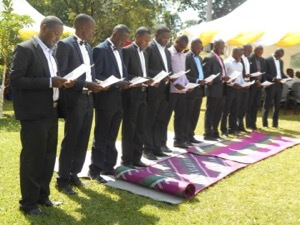 Of these newly professed, all are from Uganda, except for Mr. Nganda John Mwilu who is a Kenyan. 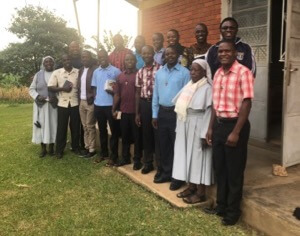 As part of their final preparations for their First Professions, the novices participated in a pre-profession retreat preached by Fr. David Eliaona, C.S.C. Fr. Eliaona, a member of the District of East Africa, has been in Tanzania doing research related to his doctoral thesis at the University of Notre Dame.

He focused on the need for each religious to “write (and continually rewrite) his personal narrative,” especially the ways in which God calls him and works in his life. He proposed Mary who “pondered all these things in her heart” as a scriptural model in this regard. He showed the movie Romero to illustrate a saint willing to learn and change as he pondered all that God asked through his life.

For the first time in many years, the Mass of First Profession was held outside, due to the large class of novices. Well over 200 came for the celebration. In addition to the novices’ families, there were a large number of Holy Cross sisters, brothers, and priests, as well as the spiritual directors and pastoral supervisors who had assisted the novices, along with the Novitiate support staff and many representatives of the local parish chapels where the newly professed led communion services each Sunday. 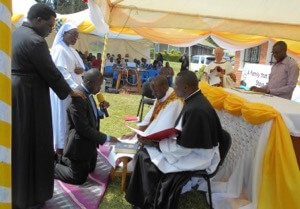 Fr. Henry Kajubi, C.S.C., Assistant Superior of the District of East Africa, presided and preached at the Mass, as well as received the novice’s Profession of Vows.

In his homily, Fr. Kajubi stressed that each newly professed should “remember his story”, share his story with God, share it with his brothers and then, in an appropriate way, share it which those he will serve. It is in that story, which begins in the family, he said, that each will discover over and over again the work of God in his life. It is that story which will teach him both humility and trust in Divine Providence as he lives his vows.

Fr. Kajubi then used the Constitutions to speak of the vows as “acts of love for the One who loved us first.” He stressed that only by being the “poor ones,” recognizing our need for one another and for the grace and mercy of God, can we live the vows faithfully. 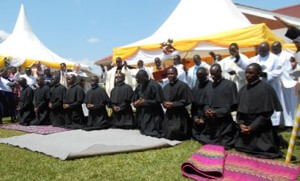 Following the Mass, a celebratory lunch for all was held on the beautiful grounds of the Novitiate. The lunch stretched into the evening when roasted goat, pork and chicken kept the party going till after dusk.

After a brief holiday, including a few days with their families, the newly professed will report to McCauley Formation House in Nairobi, Kenya, on August 2 to continue their formation and to study at Tangaza University College. 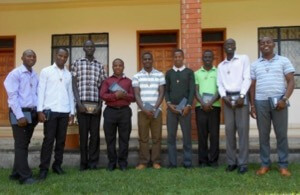 Fr. Smith presided and preached at the reception liturgy. The new novices then went on a three-day, silent, orientation retreat directed by Sr. Romina Nyemera, Superior General of the Our Lady of Good Counsel Sisters, Mbarara, Uganda.

These nine new novices, as well as the dozen newly professed, are living signs of the continued growth of the Holy Cross community in Africa.

Special thanks to Fr. Tom Smith, C.S.C., for contributing to this news article.