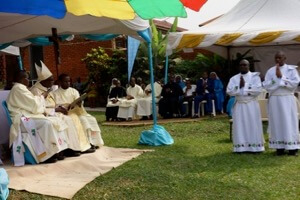 The celebrations this year of St. André Bessette’s Feast Day were even more joyous this year in the Congregation of Holy Cross’s District of East Africa. On the January 6, the feast of the Congregation’s first canonized saint, Fr. Prosper Atukwatse, C.S.C. and Fr. Joseph Owori, C.S.C., were ordained to the priesthood.

The Ordination Mass was held at St. Augustine Institute Nsambya in Kampala, Uganda. It is a site that the District of East Africa has used previously for Ordination celebrations.

The Most Rev. Vincent Kirabo, Bishop of the Hoima Diocese in Uganda, served as the ordaining bishop. Bishop Kirabo has many connections to Holy Cross, including having lived and studied at the Congregation’s University of Portland in Portland, Oregon.

Read news of other Ordinations in Holy Cross

Fr. Robert Epping, C.S.C., Superior General of the Congregation, was in attendance, having just attended the District’s Chapter. He concelebrated the liturgy.

Over 1,000 people attended the ordination, including several Holy Cross Priests, Brothers, and Sisters. There were also many parishioners from Holy Cross parishes who journey, some of them for more than a day, to come to the Ordination. 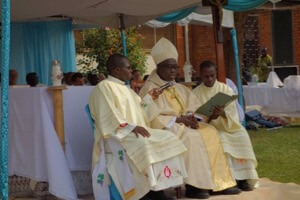 “The two odinandi were blessed by a beautiful day for the outdoor ceremony,” said Fr. Thomas O’Hara, C.S.C., Superior of the United States Province of Priests and Brothers, which has oversight of the Congregation’s District of East Africa. “The pride and joy of their families was so evident as they presented their sons to be ordained. Fr. Epping was so moved by the singing that in his remarks after communion he asked the choir to sing again the refrain from a song they sang earlier. They complied and soon hundreds were standing and singing along with the choir. A powerful intervention by the Superior General!”

After the Liturgy, a lunch was served which was followed by the cutting of the cake, presentation of gifts, with dancing and music well into the evening.

Explore pictures of Ordinations around the world

The Ordinations were the first to take place under the leadership of the newly elected Superior of the District of East Africa, Fr. Constantine Changwe, C.S.C. He was elected during the District’s Chapter, which took place from December 31, 2017, to January 4, 2018. He replaces Fr. Patrick Neary, C.S.C., who served as District Superior for six years. Prior to his election, Fr. Changwe was Pastor of Holy Cross Parish in Nairobi, Kenya.

“We as a District are thankful to God because it has added the number of the Clergymen in the District and the Universal Church. It has also fulfilled the African desire of seeing the young ones taking a radical decision to serve the Church as ordained ministers and foregoing marriage life,” said Fr. Changwe.

“These ordinations have also added laborers to sacramental ministries,” continued Fr. Changwe. “This makes Holy Cross influence in apostolic work audible. We are happy to have Fathers Prosper and Joseph as ordained ministers of the Church.”