Earlier this month, on January 7, the feast day of St. André Bessette, eight men arrived at the Congregation of Holy Cross' Latin American Novitiate in Huaycán, on the eastern edge of Lima, Peru. The men came from Brazil, Chile, and Mexico. 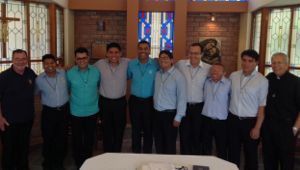 Prior to getting to the Novitiate, the novices-to-be spent January 6 at the Formation House in Canto Grande, arriving just in time to participate that evening in the Vigil Mass of the Feast of St. André Bessette and witness the renewal of Vows of third-year Peruvian theologians, Julio Arias, C.S.C., Elmer Caro, C.S.C., and David Olarte, C.S.C. At the conclusion of the Mass, the novices were introduced and welcomed with applause by the standing-room-only crowd which had gathered in the El Señor de la Esperanza Parish Center, a parish staffed by the Congregation. The presence of the Holy Cross Sisters and their novices from Burkina Faso, Mali, and Haiti added to the international flavor of the festive Holy Cross celebration. 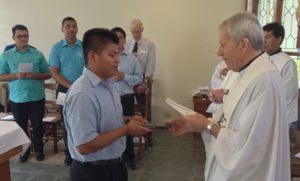 That night the novices made the hour-long trip from Canto Grande to Huaycán where upon arrival they gathered in the novitiate chapel for a brief prayer of thanksgiving.

The following day, on January 7, the Rite of Introduction to the Religious Life was celebrated at the conclusion of the late morning Mass for the feast of Saint André Bessette, which was attended by the full membership of the Congregation's District of Peru and the Holy Cross religious from Brazil, Chile, and Mexico. 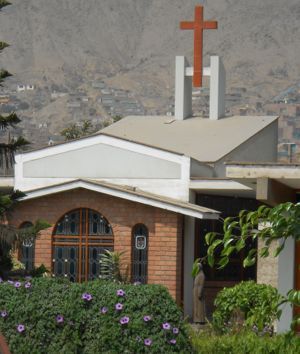 In his homily Fr. Don Fetters, C.S.C., the Novice Master, cited the day’s Markan text about the feeding of the 5,000. He suggested that this was a unique year of grace -- a time in which the novices could come to know in greater depth the many surprising and abundant gifts God had given them for others, of which they might not yet even be aware; and then to understand more clearly how the Lord would want them to use them.

That night, the eight novices began a three-day silent retreat with Compline.