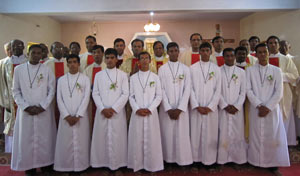 Eight novices of the Congregation of Holy Cross professed their First Vows in India on May 31. The celebration took place at the Domus Marie Sisters' Chapel adjoining Holy Cross Novitiate in Yercaud, Tamil Nadu. 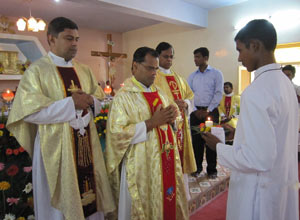 About 100 people, including many relatives of the men professing as well as Holy Cross religious, attended the Mass. Most of them stayed for a short celebration that followed the Mass. 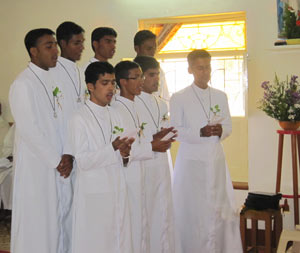 During that celebration, the newly professed, along with their respective Major Superiors, paid tribute to the hard work of the Novice Master, Rev. Alexander Susai, C.S.C., and his staff in guiding and accompanying the novices in their vocational discernment and formation.

In a special way, Rev. Jean Charles Descary, C.S.C., the Assistant Novice Master, was recognized and thanked for his spiritual formation of the novices and for the other services he has rendered at the Novitiate for the past few years. Everyone wished him well as he transitions to his next assignment at Holy Cross Seminary in Pune, Maharashtra.

The following day, June 1, 20 new novices belonging to all the four sectors of Holy Cross in India were officially received into the Novitiate by their respective Major Superiors in a simple ceremony. That same day, Rev. Clement Amo, C.S.C., from the Province of North East India was welcomed to the Novitiate Staff and installed as the Assistant Novice Master.