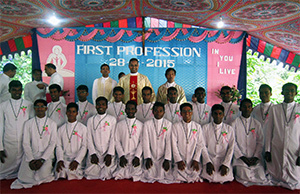 On May 28, 2015, at the Holy Cross Novitiate at Yercaud, India, 18 novices made their First Profession in the Congregation of Holy Cross. All four of the Congregation’s jurisdictions in India were represented in this First Profession class, which had been shepherded in the Novitiate by Fr. Alexander Susai, C.S.C., Novice Master, and Fr. Clement Amo, C.S.C., Assistant Novice Master.

Of these 18 newly professed this year, six are from the Province of South India (Bangalore, Karnataka); six are from the Vicariate of Tamil Nadu (Tichy, Tamil Nadu); four are for the Vicariate of Holy Cross Brothers in India (Bangalore, Karnataka); and two for the Province of North East India (Argatala, Tripura).

To help them prepare for their First Professions, the 18 novices were led in a weeklong retreat by Fr. Gordon, C.S.C.

The novices were also joined at their First Professions by their parents and close relatives, local priests and religious, friends of the Congregation, and confreres in Holy Cross from across India. 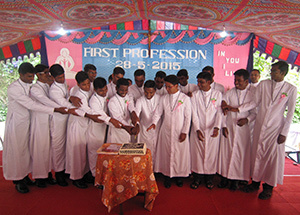 Following the Mass, there was a sumptuous meal hosted in honor of the newly professed.

Both the meal and the Mass had been organized and prepared by Fr. Alexander, Fr. Clement, and other confreres in the Novitiate community, which comes under the jurisdiction of the Province of South India.

In addition to the good news of these 18 First Professions, the Congregation of Holy Cross in India is also rejoicing in the fresh group of 16 new novices that entered the canonical year of the Novitiate on May 15. Fr. D’Souza presided at the liturgy that welcomed them into the Novitiate.

Special thanks to Fr. Justin, C.S.C., for contributing to this news story.