This past May was a time of celebration for the Congregation’s District of East Africa, which includes Uganda, Kenya, and Tanzania. On Saturday, May 19, the weekend of the Feast of Pentecost this year, five members of the growing District made their Final Professions of Religious Vows in a celebration at the Congregation’s Bishop McCauley House of Formation in Nairobi, Kenya. 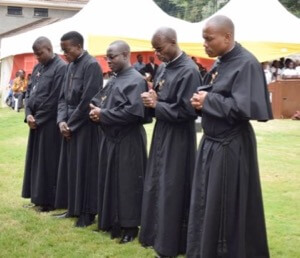 “On this feast of Pentecost, these men are a great gift to the Christians of East Africa, Holy Cross, and the Universal Church,” said Fr. Richard Wilkinson, C.S.C., Vicar and First Assistant Provincial of the United States Province of Priests and Brothers, which shares responsibility for the Congregation’s District of East Africa. “This celebration here in Dandora is a new Pentecost as we gather from different tribes and countries, we speak many different languages and yet we have one faith in Jesus Christ.”

Reflecting the Congregation’s charism of being “composed of two distinct societies of religious, one of religious priests and one of religious brothers, bound together in one indivisible brotherhood” (I:6), this Final Profession class included two brothers and three seminarians.

Read about the Congregation's "invisible brotherhood"

Fr. Wilkinson presided at the Final Vows Mass, and he also received the vows of the three seminarians. The vows of Br. Mugume and Br. Omukuia were received by Br. Bill Zaydak, C.S.C., Superior of the Moreau Province, which shares responsibility for the District of East Africa.

In typical African fashion with singing and dancing, a festive and joyous celebration ensued following the Mass. Family members and friends of the newly finally professed joined the Holy Cross community in celebrating and giving thanks for these men and their vocations.

Learn more about Holy Cross around the world

“The celebration of final vows was truly an experience of the family of Holy Cross as parents, family, co-ministers, friends and religious of various communities came together along with brothers, sisters and priests of Holy Cross. The three countries of the District (Kenya, Uganda, and Tanzania) were well represented,” said Br. Zaydak. 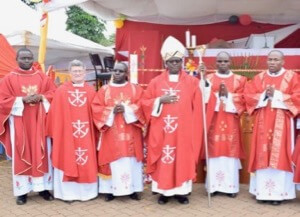 The joy and celebration continued the following morning, Sunday, May 20, at Holy Cross Parish in Dandora, Nairobi, where the Most Rev. David Kamau, Auxiliary Bishop of the Archdiocese of Nairobi, presided at the Diaconate Ordinations of Mr. Mwesigwa, Mr. Sserugo, and Mr. Berry.

The five of the newly finally professed are now embarking on fulltime ministry, serving in the educational apostolates and parishes of the Congregation in East Africa.