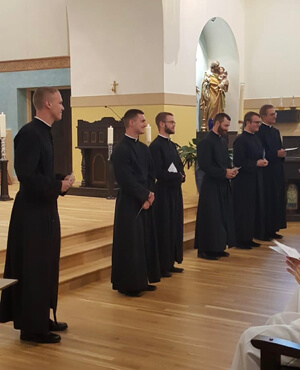 Six Holy Cross novices, including two for the Society of Brothers and four for the Society of Priests, made their First Profession of Religious Vows in Colorado Springs, Colorado, on Saturday, July 28, 2018. All six newly professed are members of the United States Province of Priests and Brothers.

"Having seminarians and scholastics formed together has always been important for who we are and what we do as Holy Cross, so it's a joy that we have two young men who are newly professed in the brothers' society," said Fr. Neil Wack, C.S.C., the Second Assistant Provincial of the United States Province and its former Vocation Director.

For their more immediate preparation for First Vows, in the week leading up to their Professions, the novices participated in a retreat led by Fr. Steve Lacroix, C.S.C., Pastor of Christ the King Parish in South Bend, Indiana.

The retreat was called "Virtue, Happiness and the Vows".  Fr. Lacroix discussed each of the "lively virtues" in terms of the vows and linked them to the traits of happy religious described in Stephen Rossetti's "Why Priests Are Happy". 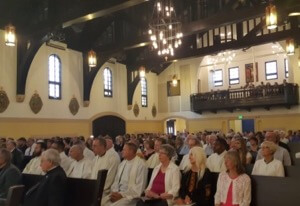 After having been held in 2017 in Our Lady of the Woods Parish in Woodland Park, Colorado, due to renovations at Sacred Heart Church in Colorado Springs, the Mass of First Professions this year was held once again at the Holy Cross-sponsored parish.

Not only were these the first First Professions in the newly renovated Sacred Heart Church, but they were also the first First Professions for Fr. William M. Lies, C.S.C., the newly elected Provincial Superior of the United States Province of Priests and Brothers, Fr. Lies was elected on June 14, 2018, at the Province’s Chapter, which was held at King’s College in Wilkes-Barre, Pennsylvania.

The six novices drew a large crowd of Holy Cross religious, family, friends, ministerial colleagues, and parishioners to the Mass to celebrate with them. Fr. Lies presided at the Mass and received the men’s First Vows, while Fr. Molinario preached the homily.

Learn about Holy Cross' community of brother and priests 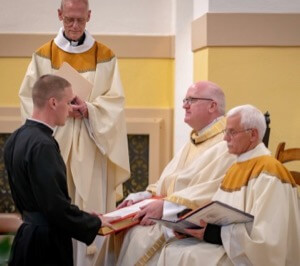 In his homily, Fr. Molinario told the novices that their vocations to religious life are “about falling in love with God, the One who loved you first, lovingly placing you in your mother’s womb—the God who journeyed with you through your Blessed History, calling, leading you to the Profession of Vows in the Congregation of Holy Cross.”

He then offered three points of reflection on love, culminating in the call to “to love as God loves, loving all that God loves! But understand: God has already placed His love within you, that seal upon your heart! You will know of His Love, and others will see it reflected in and through you, through the presence of a deep, inner joy permeating your life, confirming that you are where God wants you to be, empowering you to give generously of yourself in service to others!”

A reception was held in the parish center following the Mass so as to greet and congratulate the newly professed. Later that evening, a special meal was held at the Holy Cross Novitiate in Cascade for men’s families and the Holy Cross religious.

“It is a joy to have been a part of the celebration of First Vows today,” said Fr. Lies. “I was struck by the devotion and commitment of these young men, our brothers, and the sincerity and trust with which they professed their vows and their lives to God through Holy Cross. It's especially poignant in an age when devotion and commitment, sincerity and trust are sometimes hard to come by. 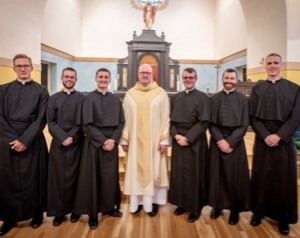 “It was a delight, too, to celebrate with their families and ours,” he continued. “We are a blessed band of men, and particularly blessed today to have these young men and their families join our Holy Cross family.”

The six newly professed are now on their way back to Moreau Seminary in Notre Dame, Indiana, where they will continue their initial formation. Meanwhile, back at the Novitiate, the staff is working hard to prepare to receive the incoming class of 14 new novices of the United States Province. They will arrive on Tuesday, August 7, and then be officially received into the Novitiate on Friday, August 10.