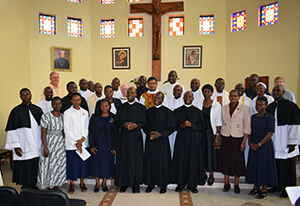 Sunday, July 16, was a day of great rejoicing in the Congregation of Holy Cross’s District of East Africa as three novices from the Novitiate in Fort Portal, Uganda, made their First Profession of Vows. The newly professed are: Mr. Agaba Emmanuel, C.S.C., Mr. Bunjako Charles, C.S.C., and Mr. Kamanyire Erineo, C.S.C. All three hail from Uganda and are studying for the priesthood in Holy Cross.

Their first vows were received by Fr. KJ Abraham, C.S.C., Second General Assistant of the Congregation, who also presided and preached. Both Fr. Tom Smith, C.S.C., the Novice Master, and Fr. Francis Mukasa, the Assistant Novice Master, concelebrated the Mass.

In the days leading up to the First Professions, Fr. Abraham had also directed the novices’ pre-profession retreat during which he emphasized that each one has his own special God-given “light” to offer as a religious in Holy Cross. 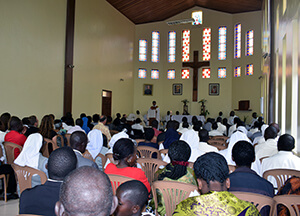 The First Profession Mass itself was celebrated by over 150 in the Novitiate Chapel. Among the guests was a large number of Holy Cross sisters, brothers, and priests. Also in attendance were the spiritual directors and pastoral supervisors who had assisted the newly professed during their Novitiate year, the Novitiate employees, as well as representatives of the local parish chapels where the newly professed led communion services each Sunday.

In his homily, Fr. Abraham recalled the words of Pope Francis who has described himself as “one who is looked upon by the Lord.” He urged the newly professed to understand themselves in that way, to always live in the awareness that they have been first of all “seen, known and blessed by God.”

It is not what you do that makes you religious, he said; rather, religious are primarily “seekers of God” and “billboards” of God’s loving regard for all. 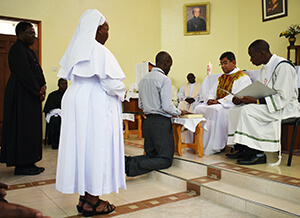 Reflecting on the day’s Gospel, the parable of the sower whose seed falls on different soils, Fr. Abraham told the newly professed that if they keep Jesus as their center the small seed planted within them now will indeed produce a rich harvest. God calls ordinary people, the weak of the world, he said, but the vows help us to be free from our “small selves” so as to make a great gift of ourselves to God and others.

"You are God's gift to the Congregation" Fr. Abraham concluded, "and Basile Moreau is surly smiling upon you." 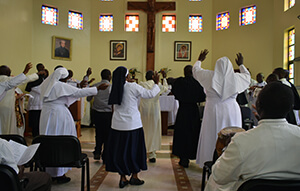 There certainly was a lot of smiling during the First Profesion Mass, and the joy overflowed with a festive thanksgiving dance led by the newly professed who were joined by a number of others from the assembly.

The celebrating continued after Mass with a delicious lunch on the beautiful grounds of the Novitiate, located on Lake Saaka at the foot of the Rwenzori Mountains. The lunch stretched into the evening when roasted goat and chicken kept the party going till after dusk.

“It was a great blessing to have a representative of the General Administration present among us to receive the vows of our newly professed,” said Fr. Smith. “We felt our connection with international Holy Cross most strongly. Each First Profession day here is a wonderful experience of joy not for the newly professed, of course, but it is also a sign of hope and moment of joy for all of Holy Cross in East Africa. 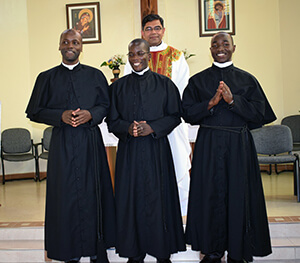 “[These men] have a deep love and appreciation for Holy Cross and have used their novitiate year well to listen to God and discern seriously their call,” he continued. “I thank God for leading them to commitment with us.”

After a brief time visiting family, all three newly professed will proceed to McCauley Formation House in Nairobi to continue their formation and to study theology at Tangaza College.

Taking their place at the Novitiate is a large class of 12 novices, including one for the brothers’ society and 11 for the priests’ society. They will be officially received into the Novitiate on July 21, in a liturgy presided by Fr. Smith. Following their official reception, the 12 new novices will make a three-day, silent retreat directed by Fr. John Fortunate, OFMCap.

Joining Fr. Smith on the Novitiate Staff this coming year will be Br. Everest Neema, C.S.C.  He is replacing Fr. Mukasa, who has been appointed pastor of St. Jude Parish Kyarusozi in Uganda.

Special thanks to Fr. Tom Smith, C.S.C., for contributing to this news story.