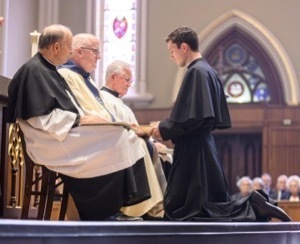 On Saturday, August 31, the United States Province of Priests and Brothers celebrated the Final Professions of five of its members. They are the first in a series of professions for the Congregation of Holy Cross, as the communities in Haiti, Ghana, and India prepare their celebrations of Final Professions in the coming weeks.

The Final Professions for the United States Province, as is its long-standing tradition, were held in the Basilica of the Sacred Heart on the campus of the University of Notre Dame in Notre Dame, Indiana. Fr. William M. Lies, C.S.C., Superior of the Province, presided at the Mass and received the Religious Vows of the five men. 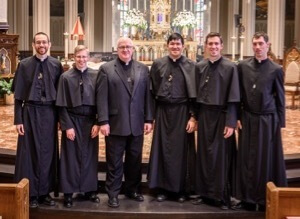 Br. DeAgostino is the first brother to profess Final Vows for the United States Province in a number of years, yet he might just be the first of several brothers to profess Final Vows for the Province in the coming years. The Province has seen a renewal in the vocation to the brotherhood in the last several years, with several brothers currently in temporary vows and initial formation.

The Final Vows "Weekend" kicked off with a prayer service in the Moreau Seminary Chapel on Friday night, August 30. The men professing Final Vows selected Fr. Peter Jarret, C.S.C., Vicar and First Assistant Provincial, to preside and preach. He had served as Rector of Moreau Seminary during many of their years in formation.

Fr. Jarret exhorted the men, "It is not the search for happiness, for worldly success, for comfort, or for recognition that defines our lives and gives us joy, it is faithfulness -- the ability to trust and rest in God's love for us and in God's call. That is what allows us to persevere - be it in married life or religious life. It is faithfulness to one's identity as God's chosen - to that knock - that defines who we are and animates our zealousness." 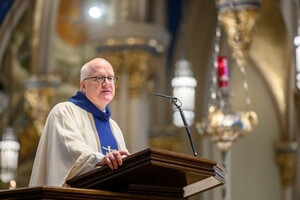 Fr. Lies at the Mass of First Profession the following morning in the Basilica picked up on the theme of fidelity and the vows in his homily. He spoke directly to the men professing their vows, telling them: “We your brothers in Holy Cross will stand by you as you profess your vows today and in all the days ahead. We will walk together under the same rule of life, which today you embrace, and which calls us anew to recommit ourselves to our own vows. 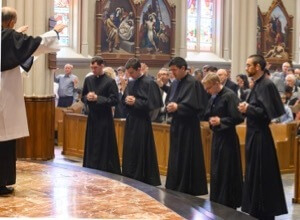 “Take courage and guidance from our Constitutions,” Fr. Lies continued. “In the celibacy you profess, love with the freedom, openness and availability that can be recognized as a sign of the Kingdom. In your poverty, seek to share the lot of the poor and to unite in their cause, trusting in the Lord as provider. And in your consecrated obedience, join with us, your brothers in community, and with the whole church in the search for God’s will. And as you profess these vows today, throw down your fears. Know that your lives, your actions, your love carry and reveal the presence of Christ.”

After the Mass, there was a reception in the Main Building for those in attendance. A little later, there was a special brunch for invited guests, including family members, friends, and colleagues of the five men, as well as many of their brothers and sisters in Holy Cross. 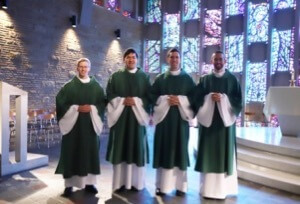 The following morning, Sunday, September 1,  in a Mass held in the Moreau Seminary Chapel, the four seminarians, Mr. Nguyen, Mr. Pedersen, Mr. Rathke, and Mr. Stoy, were ordained to the Deaconate. The Most Rev. Jorge Izaguirre, C.S.C., Bishop Prelate of the Territorial Prelature of Chuquibamba, Peru, presided at the Ordination Mass.

All five of the newly finally professed have already begun their first ministry assignments.

Br. DeAgostino is working on staff at St. André House in Phoenix, Arizona, a ministry of the Province that serves people who live on the streets; Deacon Vincent is a member of the parish staff at Holy Cross Parish in South Bend, Indiana; Deacon Stoy is working at Christ the King Parish, another parish administered by the province in South Bend; Deacon Rathke is part of the pastoral team at St. Ignatius Martyr Parish in Austin, Texas; and Deacon Pedersen is the Rector of Siegfried Hall at the University of Notre Dame. 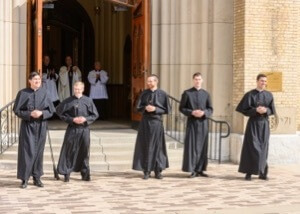