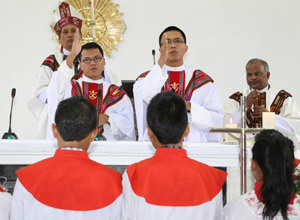 Over the past two months, October and November, five religious of the Congregation of Holy Cross were ordained priests for the Province of North East India.

All five of them had made their Final Profession of Vows in the Congregation back on February 8 of this year at Holy Cross Seminary Hall in Pune. They then were ordained deacons by the Most Rev Valerian D’Souza, the Bishop Emeritus of the Diocese of Pune, the following day, February 9 at the Papal Seminary Chapel in Pune.

The first three of the five priestly ordinations took place in Mizoram, one of the seven states of North East India. Deacons Jerome Chorei, C.S.C., Emmanuel Lalropuia, C.S.C., and Michael Vanlalruata C.S.C., were ordained in October by the Most Rev. Stephen Rotluanga, C.S.C., Bishop of Aizawl.

The presence of the Congregation in the Mizoram region dates back to 1924 and the nascent stage of the Catholic missions there. For the faithful in the region, the very mention of the name “Holy Cross” brings to mind the sacrifices and committed service the missionaries rendered to the local people in laying the foundation for the local Church. This is the first time in the history of the Church in Mizoram that there were three ordinations in a single year, let alone a single month.

Jerome was ordained a priest on October 24 at St. Francis Xavier Church, Kanhmun. He joined Holy Cross in 2000, after completing matriculation. He made his First Profession of Vows in 2007 at the Holy Cross Novitiate in Yercaud, Tamil Nadu.

Emmanuel and Michael, both of whom joined Holy Cross in 2002 after completing matriculation, were ordained priests on October 26 at St. Thomas Parish Ramhlun, a parish run by Holy Cross. They both made their First Profession on June 3, 2009, at the Holy Cross Novitiate in Yercaud. 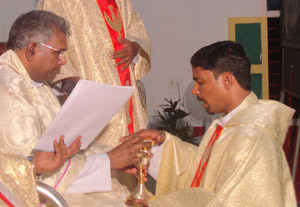 The other two ordinations were held in Tamil Nadu, one of the southern states of India.

Deacon John Valanarasu was ordained in Our Lady of Mediatrix Church, Veeraraddykuppam. He was ordained by the Most Rev. Anthony Samy Neethinathan, Bishop of Chengalpat, on October 30, 2013. Valanarasu joined Holy Cross in 2001, and after doing his initial formation in Tamil Nadu, he made his first profession in 2007 at the Holy Cross Novitiate in Yercaud. 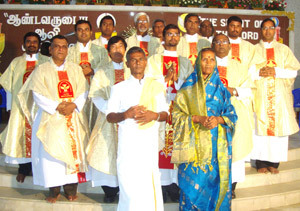 The Ordination of Deacon Pappy Valan was held in Sacred Heart Church, T. Sindalacherry, on November 3. He was ordained by the Most Rev. Anthony Pappusamy, Bishop of Dindigul. Valan entered Holy Cross in 2000 and made his First Profession in 2006, also at the Holy Cross Novitiate in Yercaud.