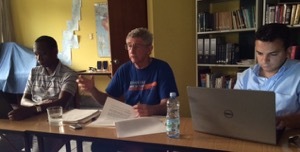 January 4 and 5, 2015, formation directors from the countries the Congregation serves in Latin America and the Caribbean gathered for a meeting in the Holy Cross Novitiate in Huaycán, Perú.

The “Encuentro de Formadores de América Latina y el Caribe” was a chance for those engaged in formation ministry for Holy Cross in the region to gather and learn from each other, as well as deepen the collaboration between the various formation programs.

“I am very grateful for having been here, participating in this meeting of formators from Latin America and the Caribbean in order to share, reflect, and enrich the contents of our programs and structures for postulancy,” Fr. Jacquy Dagobert, C.S.C., the Director of Postulants in Haiti. “It is a very important step to affirm and consolidate our internationality from the core that is initial formation.”

This year’s meeting focused on the various postulant programs. Postulancy, also referred to as candidacy, is the first stage of initial formation in the Congregation. As the Constitutions state, “Candidates who come to the Congregation deserve from us the cultivation of their maturity, faith, generosity, learning and ability to live in community. With them we assess their character and growth as Christians, and we both discern and assist them to discern whether they are disposed and able to move towards joining our Congregation” (6:61).

Each postulancy program shared what they are currently doing to form the young men according to the pillars of formation outlined by the Congregation’s Guide for Vocations and Formation. Then, using documents from the Church and the Congregation as reference points, the group explored ways to strengthen these programs. It also identified some ways to collaborate more concretely. 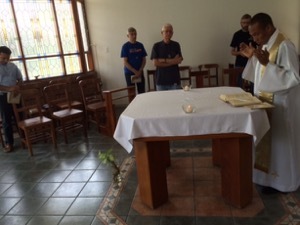 In particular, there were many fruitful conversations of how to prepare the young men coming to the Congregation for service not only in the local Church, but also the Universal Church. There is a desire and need to contextualize their formation in the cultures and communities from which they come, while opening them to a wider mission that crosses borders of every sort.

“The formators’ meeting was a very enriching experience for me, as I begin my new ministry as the Director of Postulantes in Peru,” said Deacon Elmer Caro, C.S.C. “I learned much from the presentations of the postulant programs in the countries of Haiti, Brazil, Mexico, Chile, and Peru. I pray that Our Lord guides and illumines all of us in this ministry to accompany well the young people who want to be formed to serve the Lord through the Congregation of Holy Cross.”