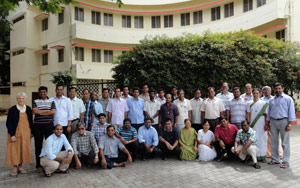 The previous three days, July 4-6, thirty-five Holy Cross religious who work in formation in Bangladesh and India gathered for the Asian Formators’ Meeting. The sessions were held at the brothers’ St. Andrew’s House in Bangalore, India, and included priests, brothers, and sisters.

Rev. K. J. Abraham, C.S.C., the Superior of the Province of North East India, served as the coordinator of the meeting. He and other major superiors of the Congregation were present for the sessions.

“The focus of the meeting was on the effective accompaniment of the formees at different stages of formation,” said Fr. Abraham. “Hence we had two days of input sessions by very competent resource persons, namely Sr. Sheela, SSpS, and Fr. Vincent Paul Raj, CMF.” 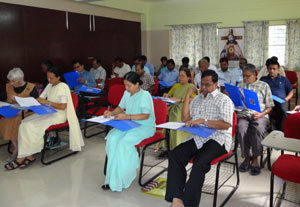 On the third day, the participants spent time sharing their experiences working in the various formation houses that Holy Cross has in Asia. The conversations began looking at recruitment and vocation promotion and then continued through the whole process of initial formation, from the candidacy programs through the post-novitiate programs. There was even a conversation about on-going formation for finally professed religious.

“Though it was a hectic session, the participants were exposed to the different ways that formation is done in various sectors, with a focus on the achievements and fulfillments as well as the challenges of formation,” said Fr. Abraham. 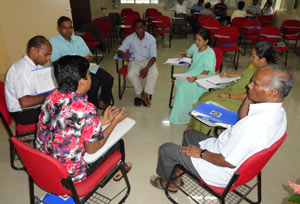 Sr. Mitali, C.S.C., who came from Bangladesh to attend the three-day meeting, described it as a “very enriching experience.” In fact, the formators who attended recommended that the meting take place every two years, as opposed to every three years.

They also made a series of other recommendations, mostly pertaining to providing training for formators, to strengthen the formation given to young members of the community in Asia. At the same time, they affirmed the rich multicultural diversity of Holy Cross in the region.

The meetings concluded with Fr. Abraham and the other major superiors present thanking the priests, brothers, and sisters who work in formation for their service to the community and to the Church.

All six jurisdictions of the Congregation of Holy Cross in Asia were represented at the meeting. The four sisters present were members of the Sisters of the Holy Cross.