The biennial meeting of the four Holy Cross General Councils was hosted by the Sisters of the Holy Cross at St. Mary’s College in Notre Dame, Indiana, from October 2-4. 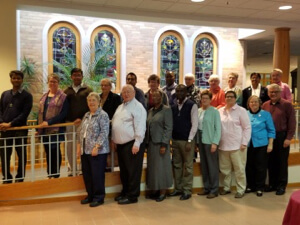 Sr. M. Veronique Wideower, C.S.C., President of the Sisters of the Holy Cross, welcomed the leadership teams to St. Mary’s College and moderated the meeting.

This was the first time the new General Council of the Congregation of Holy Cross, under the leadership of Fr. Robert L. Epping, C.S.C., Superior General, attended this meeting.

Meet the General Council of the Congregation 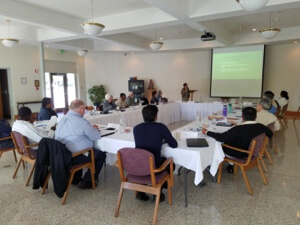 It was also the first time for the leadership team of the Sisters of Holy Cross as they elected a new Council at their Chapter this past summer. Sr. Raymonde Maisonneuve, C.S.C. was elected their new General Superior.

Sr. Ann Lacour, M.S.C., continues her term as Congregation leader for the Marianites of Holy Cross.

The gathering presented the opportunity for each congregation to share their accomplishments since the last meeting in 2015, their hopes for the next two years, and the various blessings and challenges they have faced.

There were also conversations about several areas of collaboration, including the future of the Solitude in Le Mans, the International Heritage Session, the causes of saints, the International Shrine of Blessed Basile Moreau at Notre-Dame de Sainte Croix, and the renovations at St. Joseph’s Oratory. 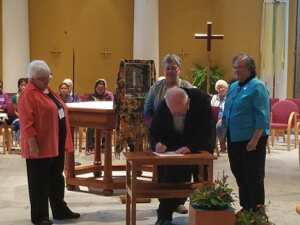 One of the highlights of the meeting was the signing of the Holy Cross Collaborative “Statement on Non-Violence and Just Peace.” The statement calls the four Holy Cross congregations to take specific actions to reject violence in its multiple forms, including violent responses to conflict, particularly war and terrorism; denial of human and civil rights; economic and military policies that exacerbate poverty and inequality; degradation of natural resources and ecosystems; and violent and disrespectful political discourse.

The signing of the Statement by the four Superiors General took placed within the context of prayer service in the Loreto Chapel in the presence of the sisters and their lay collaborators. 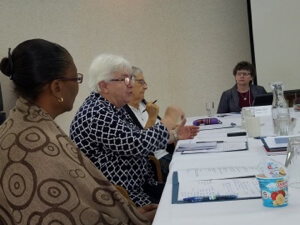 “Although our four congregations are different with our own unique sets of opportunities and challenges, what unites us is our common heritage, mission, and charism,” said Br. Paul Bednarcyzk, C.S.C., Vicar General and First General Assistant, reflecting on the gathering. “The spirit of the Family of Holy Cross was very much alive at this meeting and that is what makes all of us committed to move forward together into the future as the daughters and sons of Basile Moreau.”

The next gathering of the four councils will be in 2019 in Montreal and will be hosted by the Sisters of Holy Cross.