Last month, on February 20, four members of the Congregation of Holy Cross made their Final Profession of Religious Vows in India in the presence of their families, friends, and Holy Cross confreres. The four are Mr. Mahesh Joseph, C.S.C., Mr. Gabriel Darlong, C.S.C., Mr. Francis Xavier, C.S.C., and Mr. Cruz Jockin, C.S.C.

The colorful ceremony was held at Christ the King Parish in Pune, India, which is administered by the Congregation’s South India Province.

Br. Thomas A. Dziekan, C.S.C., the Congregation’s Vicar General and First General Assistant, received the vows of the four men. Fr. Robert L. Epping, C.S.C., the Congregation’s Sixth General Assistant, presided at the Mass of Final Profession and preached the homily. In his homily, he exhorted the four to remain radically faithful to the vows they professed and become, through the witness of their life, a living sermon to the people to whom they minister.

"It was a simple and moving ceremony in the presence of the members of the local Holy Cross parish and members of the community," said Br. Dziekan. "These events and ceremonies always provide a great opportunity to renew one's response to God's call and to reflect how it can be done better. The response of these young men is always touching because of the depth and simplicity of the love with which they profess their vows."

View a gallery of Final Vows from around the world 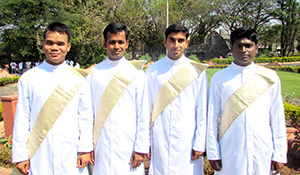 The next morning, Mahesh Joseph, Gabriel Darlong, Francis Xavier, and Cruz Jockin were all ordained deacons in an Ordination Mass that also included seminarians from different dioceses in India. The Most Rev. Thomas Dabre, Bishop of Pune, was the presiding and ordaining bishop. The Mass was held at the Papal Seminary Chapel in Pune. 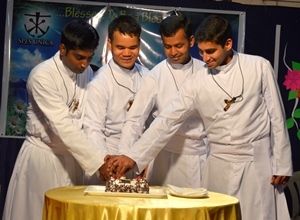 The newly finally professed men hail from three of the Congregation’s jurisdictions in India. Mahesh Joseph belongs to the South India Province. Gabriel Darlong and Francis Xavier belong to the Province of North East India. Cruz Jockin belongs to the Vicariate of Tamil Nadu.

The four men now will serve as deacons in their respective jurisdictions during the summer and return to Pune in June to complete their theology studies.