This past Saturday, May 31, at the Holy Cross Novitiate in India, 14 novices made their First Profession of Vows in the Congregation of Holy Cross. The joyful Mass of First Profession was held on the Novitiate’s grounds in Yercaud, Tamil Nadu, and was attended by many of the novices’ family members as well as many of their confreres in Holy Cross and other religious men and women. 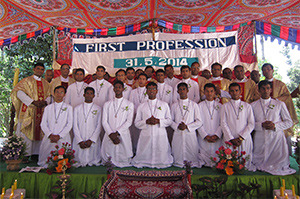 The 14 newly professed members of Holy Cross come from all four of the Congregation’s jurisdictions in India. One is a member of the Vicariate of Holy Cross Brothers in India (Bangalore, Karnataka). Three come from the Vicariate of Tamil Nadu (Trichy, Tamil Nadu). Four are members of the Province of North-East India (Agartala, Tripura), and the remaining six hail from the Province of South India (Bangalore, Karnataka). Each of their respective major superiors was present to receive their vows with the words: “May God who began this good work in you bring it to completion.”

Br. Sesuraj, C.S.C., the Superior of the Vicariate of Holy Cross Brothers in India, presented the newly professed with a cross they will wear as a sign of their membership in the Congregation. He also received the First Profession of Br. Vimal Kumar A., C.S.C. 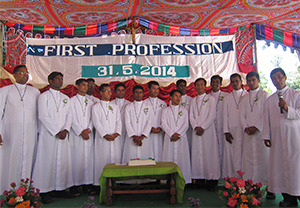 In his homily, Fr. Kochupurakal reminded the newly professed, “The Lord chose each one of you and took you by the hand. All these years and for the rest of your lives, He will go on forming you in order to send you to free, to heal, to create just relationships, to live as men who care, who are trustworthy companions, and who intercede for others before God.

“Begin a fresh your life, now on as religious of Holy Cross,” he continued. “Take up our life with the same passion, confidence, and competence of our Blessed Founder Father Moreau, embracing all things in Jesus, and as the new shoots of the vine, let yourselves be embraced and carried by the vine. Abandon yourselves to your Lord and Friend that He might clothe you in flowers and fruits.”

At the end of the Mass, Fr. Diraviam recognized the great work of the Novitiate staff in preparing these 14 men for their First Profession. Fr. Alexander Susai, C.S.C., is the Novice Master in India, and he is assisted by Fr. Clement Amo, C.S.C.

Read about other First Professions around the Congregation

Fr. Susai and Fr. Amo went immediately back to work after the Mass of First Profession as two weeks prior, on May 15, they had received 21 new novices into the Novitiate in a ceremony that took place in the Novitiate Chapel. Br. Sesuraj presided at the ceremony. 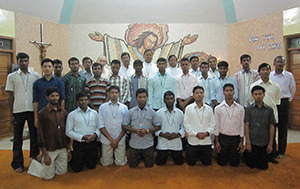 Like the newly professed, the 21 new novices hail from all four of the Congregation’s jurisdictions in India. Six are from the Province of South India. Four are from the Province of North-East India. Six are members of the Vicariate of Tamil Nadu, and five come from the Vicariate of Holy Cross Brothers in India. They will spend the following year in formation in Yercaud under the guidance of Fr. Susai and Fr. Amo.