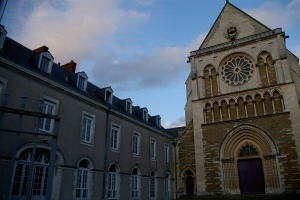 The Superior General, Fr. Richard V. Warner, C.S.C., and his Council have been working to establish the shrine with the assistance of the Congregation's Vicariate of France and the encouragement of the Diocese of Le Mans.

Fr. John DeRiso, C.S.C., a member of the United States Province of Priests and Brothers, was named the first Rector of the Shrine.

Learn more about Blessed Basile Moreau and his heroic life 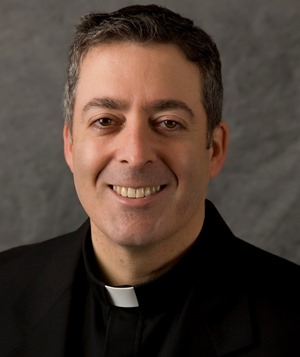 “My initial response to being asked to be the rector of the Shrine of Blessed Basile Moreau was one of gratitude to God for the gift and privilege of being invited to serve at the Conventual Church of the Congregation of Holy Cross,” said Fr. DeRiso, who had served the previous nine years as Pastor of St. Joseph Parish in South Bend, Indiana, in the United States. “I also felt profound joy at being given the opportunity to establish a shrine in honor of God's servant, Basile Moreau, whom I have come to love and admire in my life as a religious of Holy Cross.”

Fr. DeRiso arrived in France in mid-September to begin his work as the shrine’s rector. He said that he has spent much of his first three months in the country getting to know the Holy Cross community in France, including the Marianites of Holy Cross.

He also has been getting to know the people of the parish at Notre-Dame de Sainte-Croix, as the church is and will continue to be, even with the establishment of the shrine, a fully functioning parish. Fr. Grégoire Jean-Peirre, C.S.C., from the Our Lady of Perpetual Help Province in Haiti, serves as the parish’s pastor.

“Consistent with the vision of Fr. Moreau – to make Notre-Dame de Sainte-Croix a place which serves the spiritual needs of his religious and of the Christian community of the surrounding area – the shrine and the parish will develop and prosper together,” said Fr. DeRiso.

While preparations are still being made for the official inauguration of the shrine, Fr. DeRiso says that he has already received pilgrims who have come to pray at the tomb of Blessed Basile Moreau and to learn more about the origins of Holy Cross.

“I believe the first step in the establishment of the shrine should be that of prayer. We have begun at Notre-Dame de Sainte-Croix a weekly Holy Hour of Eucharistic Adoration for the needs of the parish and the shrine together,” said Fr. DeRiso. “We have also begun to pray together a prayer asking God's blessing on our community going forward. Soon to follow will be acts of charity and service in the local community in honor of Blessed Basile Moreau's concern for the poor and the afflicted.” 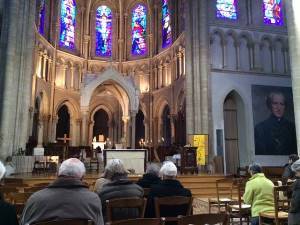 Fr. DeRiso said that he is also in the process of establishing a “Shrine Advisory Council” to help him discern how to make the shrine “a place of welcome, of prayer, and of evangelization in service of the Faith. It is our hope that the shrine will be a gift to the Congregation of Holy Cross, to the people of the parish of Notre-Dame de Sainte-Croix, to the Church in Le Mans, and to the Church universal. It will aim to testify to the life and witness of Blessed Basile Moreau and contribute to his mission of making God known, loved, and served.”

“The shrine in honor of Blessed Basile Moreau will have as its goal the greater glory of God and the sanctification of souls,” said Fr. DeRiso. “It will aspire to witness to this man of faith, of virtue, and of holiness, who belongs to all the Church as an exceptional model of the Christian life. The shrine also aspires to promote our holy founder's love and vision for his congregation. It will aim to strengthen the bonds of unity and charity among the members of the family of Holy Cross. May it also serve as a place of renewal of our vowed commitment in the service of the Gospel of Jesus Christ!”