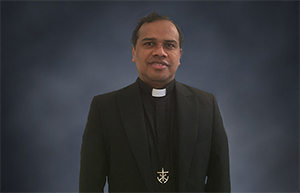 Fr. Gaspar takes the place of Bishop-Elect Jorge Izaguirre, C.S.C., who had been the Fourth General Assistant at the time of his appointment as a bishop by Pope Francis. His Ordination to the Episcopacy will take place July 10 in Peru.

"From the time Fr. Gaspar joined the General Administration in 2010, he has been a thoughtful and generous member of the staff," said Fr. Warner. "As General Steward, he has brought new initiatives to his work and has chaired the Congregational Finance Committee. He has also contributed to Canonical Visits to several jurisdictions. I am grateful to him for accepting this additional responsibility."

Meet the General Council of the Congregation

Fr. Gaspar was born on January 05, 1967, in Tamil Nadu, India. He entered the community in the year 1982 and graduated from St. Joseph’s College, Bangalore in 1988 before going to the Novitiate. After his first profession, he went on to study two years of Philosophy and three years of theology at Jnana Deepa Vidyapeeth, Pune. During his years of formation, he worked three years in the North East Province of India in the Congregation’s missions there. He professed Final Vows in the Congregation on January 06, 1996, and was ordained a priest on May 13, 1997.

In August 2009, Gaspar attended a few renewal and refreshment courses in Toronto, and then in May 2012 he graduated from Mendoza College of Business at the University of Notre Dame with a Masters in Non-Profit Administration.

"I consider this additional responsibility as General Assistant is truly an honor and privilege to me to serve the larger community in assisting the congregational leadership," said Fr. Gaspar. "These responsibilities remind me that I have received a lot from the community. So far what I have given is very little and still more is expected of me. I am really grateful to Fr. Warner and the community for their trust and confidence in me. I hope I would not disappoint them and be faithful in doing my responsibility."