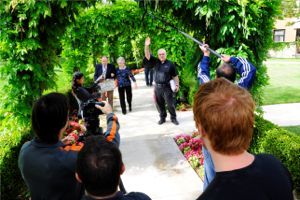 As a part of wider work of Holy Cross Family Ministries, Family Theater Productions helps continue the work begun by Servant of God, Fr. Patrick Peyton, C.S.C., to spread the practice of the family rosary. Fr. Peyton popularized the phrases that “the family that prays together, stays together” and that “a world at prayer is a world at peace.” To get his message out even more broadly, Peyton became a pioneer in harnessing the power of the media for the sake of the Gospel. He founded Family Theater Productions in Hollywood, California, for this very purpose.

Now, Fr. Guffey is entrusted with continuing that legacy and work. Fr. Guffey currently serves as Head of Production at Family Theater Productions, overseeing film, television, radio and video productions. In this role, Fr. Guffey has been responsible for moving a project from development through post-production. This work includes planning the production budget and assembling and supervising the crew during filming and post-production.

Fr. Guffey has numerous credits for his award-winning work in television and film. They include “Carrying On,” “You Will See,” “Finding Mary” and “Assumptions” – all with Family Theater Productions. He was also writer and director for the short film “Last Deal at the Mt. Carroll Gun Club.” 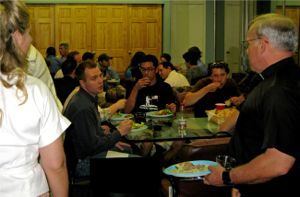 As National Director of Family Theater Productions, Fr. Guffey will oversee all the organization's activities, including both media production and pastoral outreach. Family Theater Productions has long had an outreach to young Catholics and others in Hollywood. Known as "Hollywood Prays", these outreach efforts include monthly Prayer and Pasta gatherings, in which young people gather for prayer, a meal, and then a talk. Other pastoral offerings include RCIA classes, Going Deeper (which is a new evangelization initiative), a Faith & Film Bible Study, and Theology of the Body workshops, as well as a daily Rosary and Mass and a weekly Eucharistic Holy Hour.