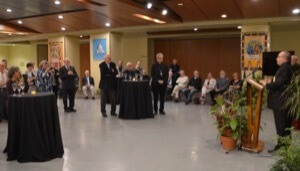 On May 31, 2019, the Congregation of Holy Cross celebrated one of its own, as Fr. Pierre Labine, C.S.C., of the Canadian Province received the Pro Ecclesia et Pontifice Award from Pope Francis. The Holy Father selected Fr. Labine for his distinguished service to the Church in his work with Volunteers Optometry for Service to Humanity (VOSH), a non-profit organization of optometrists, opticians and volunteers who provide vision care and eyeglasses for the poor in developing countries.

The Most Rev. Christian Lépine, Archbishop of Montréal, bestowed the honor at a special ceremony at St. Joseph’s Oratory. Those in attendance included the Congregation’s Superior General, Fr. Robert Epping, C.S.C., other Holy Cross, and many of Fr. Labine’s family and friends. 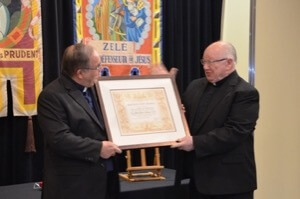 Fr. Labine’s involvement with the vision project began when he teamed up with a former student, an optometrist, and others to go to Puerto Escondido, Mexico, in 1999 to provide eye care for the needy. Two years later, they went on a second mission to Mexico and adopted the name Voluntarios Santa Cruz (Holy Cross Volunteers). In 2003, they were invited by VOSH to join their organization.

Since its original 1999 mission, the Holy Cross group has now grown with volunteers from Canada, United States, France, Australia, and Mexico. Their 70th mission was to Moldova in May of this year where they treated their 200,00th patient.