The 2016 General Chapter of the Congregation of Holy Cross is now underway in Rome, Italy, having been officially called to order on Monday, July 4, by the Superior General, Fr. Richard V. Warner, C.S.C. The General Chapter, which meets ordinarily every six years, is the highest authority in the Congregation. 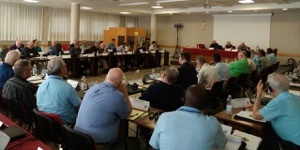 “I believe this is the most important and critical moment for us as a Congregation for the next thirty or forty years,” said Fr. Warner. “We are truly determining our preferred future after many thousands of hours at meetings of task forces, consultation with the members of the Council of the Congregation, and consultation with our membership. I hope we will all have come to Rome aware of the need for us to be open to the Spirit and to think and act from a Congregational perspective.”

According to the Constitutions of the Congregation of Holy Cross, the Chapter “must discern and decide the largest issues of the common good and regulate relations between the societies and among the provinces. … It analyzes the state of our common life and mission, promotes and safeguards the heritage of the congregation, reviews and amends the statutes, issues decrees, recommendations and declarations, elects the superior general and the general assistants, and erects, divides or suppresses provinces” (VII, 99-100).

The General Chapter is composed of an equal number of brothers and priests, exclusive of the Superior General who presides. The 2016 General Chapter consists of 63 delegates, among whom there is a mixture of ex officio and elected members. In addition to the official delegates or capitulants to the Chapter, there is also a diverse group of Holy Cross brothers, priests, and men in formation who are present in Rome assisting in a variety of roles from serving as observers or advisers to assisting in the Secretariat or Information Technologies.

Although a number of the delegates are veterans of previous General Chapters, there are many new names and faces this year. Reflective of the Congregation’s growth internationally, it is the most international group of delegates in Holy Cross’s history.

“Being my first time attending the General Chapter, I feel excited that I'm part of it,” said Br. Patrick Tumwine, C.S.C., a delegate from the District of East Africa. “Having been part of the Forum for Young Professed here in Rome, I'm enthusiastic to know what the capitulants will do to realize our internationality in real sense of the word. We need to cross boarders physically to engage in Holy Cross ministries internationally.”

Another one of those new names and faces, indicative of the Congregation’s growing internationality, is Fr. Jospeh Shiju, C.S.C., a delegate from the Province of South India.

“What strikes me at the moment are two things: the variety, which is very indicative of our internationality, and the similarity because we belong to the same family!” said Fr. Shiju. “Though most of those I met are new to me, and will remain to for a while, they don’t seem strangers. There is happy feeling of being part of such a big diverse family. 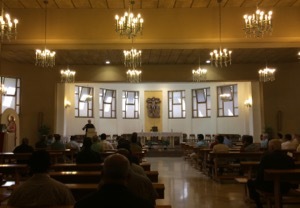 “It is with a sense of great responsibility that I enter into what I expect will be a historic Chapter for Holy Cross,” continued Fr. Shiju. “I figure that we will grapple with what internationality will mean for us as a congregation and for every local context that Holy Cross ministers in, in every part of the world. I also know that we will not struggle as people without hope, but as disciples who seek to strengthen their witness. So, whatever be the outcome of this struggle, I will be proud of having been a part of the collective effort. So it is with a sense of apprehension and a deep trust in God’s ways that I enter into the General Chapter.”

Among those who have been to previous Chapters, the change in the composition of the 2016 General Chapter is both noticeable and a sign of hope.

“In my eyes, the General Chapter of 2016 will be more innovative and unique for many reasons: the increased representation of the different ministries of the congregation, the better-than-ever representation of our cultural diversity, the first attempt to run a paper-free chapter, etc.,” said Fr. Mario Lachapelle, C.S.C., the Superior of the Canadian Province. “My hope is that as we are now experiencing the world in a more global fashion, we will make decisions that reflect the same path and allow us to function more globally while preserving local identities.” 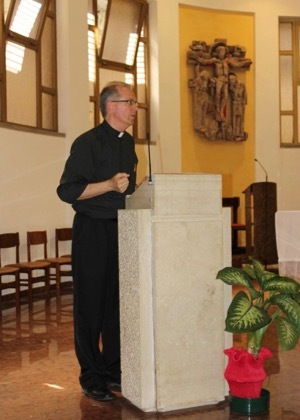 Following lunch, the General Chapter began several Days of Reflection or Retreat prepared by Fr. James Grummer, S.J., a General Counselor with the Society of Jesus who has worked with the Holy Cross General Administration in the past. The retreat, which will continue through Wednesday evening, is to assist the Chapter in entering into its work with a spirit of prayer and docility to the Holy Spirit. The retreat draws from the spirituality and tradition of Holy Cross, which each day being marked by a Votive Mass to the three patrons of Holy Cross: the Sacred Heart of Jesus, Our Lady of Sorrows, and St. Joseph.

On Thursday, July 7, the work proper of the General Chapter will begin, with the capitulants dividing themselves into five working committees: Authority and Responsibility; Mission; Religious Life, Spirituality, and Charism; Stewardship; and Vocations and Formation. Those committees do the bulk of the foundational work in preparing the Chapter’s texts and legislation, which proceeds through various stages through the Chapter.

The General Chapter is currently scheduled to last until Saturday, July 23.

“As men with hope to bring, we are called as the religious family founded by Blessed Basile Moreau to strive to make God known, loved, and served,” said Br. Ronnie Lenno Silva, C.S.C., a first-time capitulant from the District of Brazil. “Having our Chapter during the Holy Year of Mercy is a sign of God that we are living in a special moment for the Congregation and for the Church.

“Beginning with this General Chapter, it is a privilege to take part in that special moment for the Congregation,” continued Br. Silva. “In just four more years, we will celebrate the 200th anniversary of the founding of the brothers. Br. Andre Bessette, C.S.C., was the first Holy Cross religious recognized as a saint by the Holy See. May he intercede for the whole Congregation of Holy Cross that we continue to be men with hope to bring.”