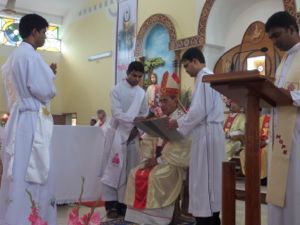 On December 28, 2013, the Congregation of Holy Cross celebrated the ordination to priesthood of Thomas Xavier Gomes, C.S.C. He was ordained at St. Agustin Church, Mothbari, in Dhaka, Bangladesh. The Most Rev. Patrick D’Rozario, C.S.C., Bishop of Dhaka Arch Diocese, presided at the Mass.

Gomes is the fifth Holy Cross priest ordained from Mothbari parish. Over 1500 members of the parish attended the Mass, in addition to Gomes’ family, relatives, and friends. They were joined by Holy Cross bishops, priests, brothers, and sisters, as well as members of other religious orders. 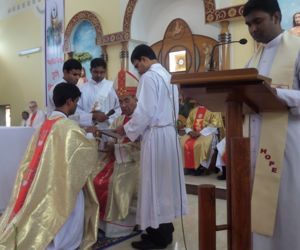 Gomes is the son of Mr. Augustine Gomes and Mrs. Bashonti Gomes. Born on November 28,1979, he joined the Congregation’s Sacred Heart of Jesus Province as a candidate after completing Class X. He made his Profession of First Vows on May 19, 2006, and then he started his philosophical studies in Holy Spirit Major Seminary, in Bananai, Dhaka.

After finishing his philosophical studies, he went to Montreal, Canada, for his theological studies. There, at the Oratory of St. Joseph, he made his Profession of Final Vows on March 20, 2013, and was ordained a deacon on June 20, 2013.

Take a Photo Tour of the Oratory of St. Joseph 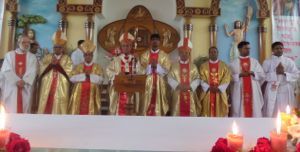 After completing his theological studies in Montreal, he returned to Bangladesh for his Ordination to the priesthood. The day after his Ordination, on December 29, 2013, Gomes offered a Mass of Thanksgiving at St. Agustin Church.

Gomes will return to Montreal to work at the Oratory of St. Joseph, which was built under the inspiration and guidance of the Congregation’s first saint, St. Andre Bessette.