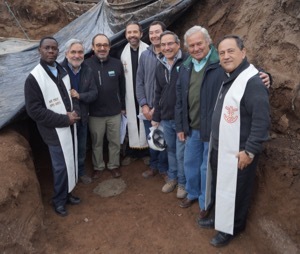 On Saturday, April 23, 2016, the Congregation of Holy Cross gathered to bless the construction of its new International House of Formation in Santiago, Chile. Reflecting the international composition and mission of the house, the Blessing Ceremony included parts in Spanish, French, and Portuguese. 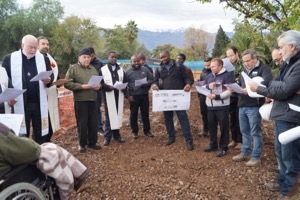 Several other members of the District of Chile also joined in the Blessing Ceremony, as did representatives of Polonesa, the construction company building the new house, and Mr. Vicente Gumucio, the project's architect from Marambio San Martín Gumucio Arquitectos.

"The blessing is to help us all realize that what we build is not for our own advantage but really to help us better serve the Lord," said Fr. O'Hara. "This is sacred, holy space where we hope to provide space for our young brothers to listen to the voice of God and to potentially take initial steps to follow in the footsteps of a great band of men."

"This new House of Formation will be a great step for the formation of future Holy Cross religious in Chile and Latin America," said Fr. Ahumada. "We hope that they will not only receive a better academic formation, but also a human, spiritual, and pastoral one. Religious life in the future will, without doubt, be very different from what we have known, but the experience of community, which is at the heart of Holy Cross, will permit future brothers and priests to support each other and engage the difficult moments in the mission."

After an initial welcome and introduction by Fr. Tom, there was a reading from the Constitutions of the Congregation of Holy Cross.The selection came from the Constitution on Brotherhood and included: “We grow close to one another as brothers by living together in community. If we do not love the brothers whom we see, then we cannot love the God whom we have not seen. In our common life we give an immediate and tangible expression to what we profess through our vows: in the local community we share the companionship, the goods and the united efforts of our celibacy, poverty and obedience.”

A psalm in Portuguese and a gospel reading in French followed the reading from the Constitutions. After a series of petitions, the superiors, Mr. Gumucio, the representatives from Polonesa, and many others in attendance descended into the foundations of what will be the dormitory wing of the new house.

Frs. O’Hara, Nord, and Ahumada each placed a holy medal in a hole that will be beneath the foundation for the new International House of Formation. As Fr. Gawrych explained, the three medals were of the three patrons of the Congregation: St. Joseph, Mary, and the Sacred Heart of Jesus. Just as Blessed Basile Moreau founded the Congregation of Holy Cross in the image of the Holy Family, the hope and prayer is that the foundations of the family of Holy Cross continue to be built in this house. 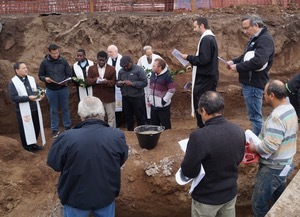 Fr. Ahumada then prayed the official text of blessing in Spanish. Afterward, the foundations were blessed with Holy Water. Then, Fr. Gawrych led all of those in attendance in praying a special Memorare to St. Joseph for the protection of all those who have and will work on the project. Fr. Panchot then blessed medals of St. Joseph that had been purchased by the Congregation to give as gifts to the workers of Polonesa.

"With the blessing of the construction of the new International House of Formation that will primarily serve diverse countries of Latin America, we have been inspired with the spirit of internationality that is moving our whole Congregation in these times and leading us to a deeper collaboration," said Br. Pereira. "We are constructing, together with the new physical house, the real possibilities for an international formation for new Holy Cross religious, as men of faith, men of communion, and men in solidarity with those who are poorest."

The formation house in Chile has already helped form men from Brazil, Chile, Haiti, and Peru, and a seminarian from the United States is scheduled to live and study the second semester this academic year in the house.

Check out the International House of Formation on Facebook 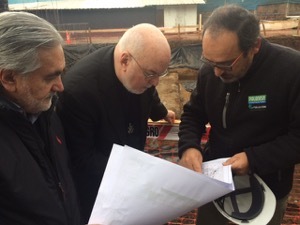 "We are an international Congregation and our Constitutions challenge us to cross borders of every kind in order to serve the Lord," said Fr. O'Hara. "This International House of Formation brings young men who cross national and cultural borders to join each other as Holy Cross men with a broad vision, understanding the differences of each other's cultures but knowing our identity as sons of Basile Moreau transcends those differences."

The site on Avenida Egaña in the community of Peñalolén is also home to the offices of the District of Chile as well as Casa Juan XIII, which is a residence for retired members of the district. The close proximity of the International House of Formation and the retirement facility allows for regular interaction and the mutual enrichment of the various generations in the Congregation.

The Egaña property is also within boundaries of San Roque Parish, which was founded and continues to be administered by Holy Cross. The parish is one of the main apostolates in which the men in formation serve apostolically as part of their formation to be Holy Cross brothers and priests. 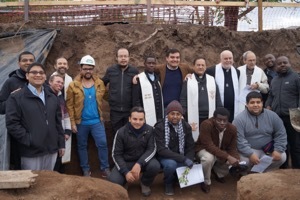 Construction of the new International House of Formation officially began in March 2015. The Congregation is working with PRS Inspección Técnica to oversee the work. The project is scheduled and on pace to be completed in February 2016.

"My participation at the blessing of the construction of the new International House of Formation was a great time to be one the witnesses of this event," said Fr. Nord. "I was very happy since Haiti is present in the International House of Formation. I am praying God to provoke vocations to Holy Cross, especially in Latin America and Caribbean, for this project to last and last. Many thanks to the District of Chile and to the United States Province."

"This new community of formation will receive young religious from different parts of the world, which, in turn, will strengthen the missionary and international dimensions of our Congregation," said Fr. Ahumada. "As Holy Cross religious, we have to be ready to cross borders of every sort and not to remain in the past and in what appears comfortable and known. There are great opportunities that then open up for religious, especially in times when culture and faith need to return to encounter one another."