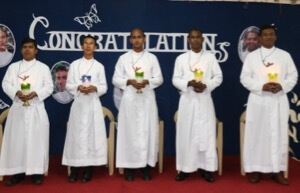 Back on October 5, 2017, the Congregation of Holy Cross rejoiced with five of its own who made their Final Profession of Religious Vows in the chapel of Holy Cross Seminary in Pune, India. The following day all five men were ordained to the Deaconate by the Most Rev. Stephen Rotluanga, C.S.C., Bishop of the Diocese of Aizawl.

Read about other Final Professions in Holy Cross

Deacon Ignaci is 30 years old, is from Ramnad Dt., Tamil Nadu, and is the youngest of four children. Since he was born on the feast of St. Ignatius of Loyola, he was named after the saint. Having professed his first vows on May 31, 2011, Deacon Ignaci attributes his vocation to Holy Cross to the prayers and support of his parents.

Deacon James is 32 years old, is from the Diocese of Dindigal, and is the oldest of three sons. Deacon James entered the Holy Cross Novitiate on June 6, 2008 and professed his first vows the following year. Family prayer, parish life, and being an altar boy all contributed to his vocation to Holy Cross. 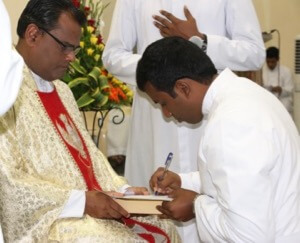 Deacon Arun was born in the District of Dindigul, Tamil Nadu and is from a Holy Cross parish. He is 28 years old and is one of two sons. Desiring to be a priest at a young age, he was encouraged and supported by his parents in his vocation. Deacon Richard entered the Holy Cross Noviaite in 2010 and professed his first vows the following year.

Rev. Mr. Bilingshar Syienlieh, C.S.C., is from the North East Province, and his vows were received by his Provincial Superior, Fr. Robert Mathias, C.S.C.

Deacon Bilingshar is 37 years old and is the youngest in his family. Coming from a devout Catholic family, he attributes his desire to become a Holy Cross Priest to the parish sisters who taught him catechism and gave him a sense of moral values. Deacon Bilingshar joined the Northeast Province of India in June 2006 at Brokedene, Shillong.

See a photo gallery of Final Vows from around the world 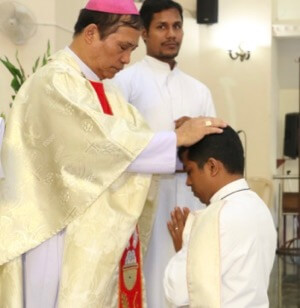 Rev. Mr. Santosh Fernandez, C.S.C., is from the Province of South India. Fr. Leo D’Sousa, C.S.C., the Superior of the Province, received his Final Profession.

Deacon Santosh was born in 1988 and is from Karnataka State. He is grateful to his parents for giving him a strong foundation in faith, prayer, and love of the God and the Church. He entered the Congregation of Holy Cross in 2004 and made first profession of vows on May 31, 2011.

These five men were the first Final Profession in India since Holy Cross made to a change to its formation program in the country. Previously, the men had professed Final Vows during their third year of theology, but the Professions were moved to their fourth and final year of theology so as to provide a more thorough and complete formation for them.