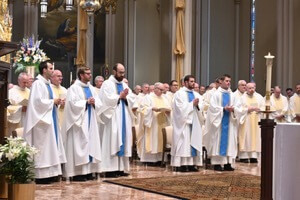 Keeping with its long-standing tradition, the Congregation of Holy Cross’s United States Province of Priests and Brothers gathered on the Saturday of the Easter Octave, April 27, for its priestly Ordinations. This year the province had the joy of celebrating a class of five new priests: Fr. Brian Kennedy, C.S.C., Fr. Karl Romkema, C.S.C., Fr. Brogan Ryan, C.S.C., Fr. Michael Thomas, C.S.C., and Fr. Bryan Williams, C.S.C.

The large ordination class made for large crowds at all the weekend’s festivities on the campus of the University of Notre Dame, beginning with a prayer service on Friday, April 26, which overflowed the Chapel of Moreau Seminary.

On Saturday afternoon, the Ordination Mass itself saw many people standing in the aisles and the back of the Basilica of the Sacred Heart. In addition to the men’s families and friends, as well as around 200 Holy Cross religious and seminarians, there were large contingents of lay people from the apostolates in which the five men had served as deacons this past year. 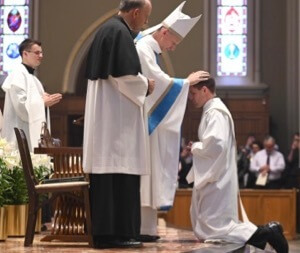 A particular joy for the United States Province was to welcome one of its own, the Most Rev. William A. Wack, C.S.C., Bishop of the Diocese of Pensacola-Tallahassee, to celebrate the Ordinations. Ordained a bishop on August 22, 2017, Bishop Wack was celebrating his first of what will be hopefully many more Ordinations at which he presides for the province.

In his homily, Bishop Wack recalled his energy and enthusiasm at his own priestly ordination 25 years prior in the same Basilica. He related the story of speaking with one of his mentors in Holy Cross, the late Fr. Jerry Wilson, C.S.C., following his ordination.

Then Fr. Wack said to Fr. Wilson that all that was left for him was to die a martyr. While not ruling out martyrdom as a possibility, Fr. Wilson called upon his young confrere to make the daily sacrifices that would make his priestly ministry fruitful. Bishop Wack similarly called on the five men being ordained to give themselves faithfully and humbly in the daily service of the People of God. 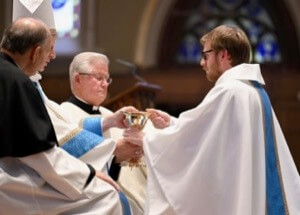 Following the Ordination Mass, there was a light reception for all in attendance under the Golden Dome of the University’s Main Building. Later in the evening there was a festive dinner back at Moreau Seminary for the Holy Cross family and the newly ordained men’s families and closest friends.

The celebration continued with great joy and thanksgiving late into the night, as the guests and members of the Holy Cross community continued talking and sharing the day's graces in the garden level of the seminary.

All five of the newly ordained will embark on their priestly ministry in the places in which they have served since their Final Vows and Deaconate Ordinations back on Saturday and Sunday, August 25 and 26, 2018. 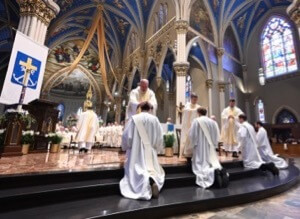 Two are at parishes: Fr. Kennedy at St. John Vianney Parish and School, in Goodyear, Arizona, and Fr. Romkema at St. Ignatius Martyr Church and School in Austin, Texas. Two are working at the province’s higher education institutions: Fr. Ryan as the Rector of Keough Hall at the University of Notre Dame and Fr. Williams in Campus Ministry at Stonehill College. The fifth, Fr. Thomas, is working in the province’s foreign missions at St. George’s College in Santiago, Chile, which is a part of the District of Chile-Peru.