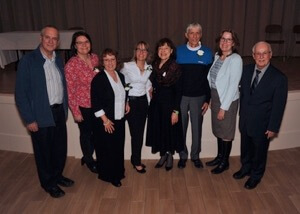 In September of this year, the Congregation of Holy Cross will mark the 17th anniversary of the founding of Le Pèlerin (the Pilgrim) in Montreal, Canada. This innovative ministry grew as a fruit of the Archdiocese of Montreal’s Synod from 1995-1998. At the synod’s final plenary session, some lay people stood up and voiced their need for spiritual accompaniment to the then Archbishop of Montréal, Cardinal Jean-Claude Turcotte.

Two years later, in 2000, Cardinal Turcotte met with the major superiors and asked if there was any community ready to work in partner to establish a training center for spiritual guides. The then Superior of the Canadian Priests’ Province, Fr. André Charron, C.S.C., expressed his readiness to get involved in such a project making it part of the different works of Holy Cross in Montreal.

To house the new pastoral initiative, the Province collaborated with Saint Joseph’s Oratory to renovate a building that had previously served as a pilgrim hostel. The building is named “Emile Deguire’s Pavilion” after one of our Holy Cross priests who worked many years at the Oratory and was spiritual director of Saint André Bessette. 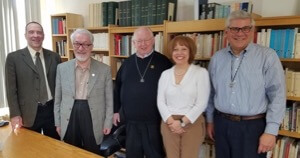 In September 2001, Le Pèlerin welcomed its first group of 36 students for a four-year formation program. Since then, each year a new group of students has been welcomed.

Currently, under the leadership of Mr. Stéfan Thériault, the Director of Le Pèlerin, there are about 100 people, including lay people, religious men and women, and priests going through formation at Le Pèlerin, which includes both coursework and personal spiritual accompaniment.

Le Pèlerin is affiliated to the Pastoral Institute of the Dominicans in Montreal, and official diplomas are awarded by the Dominican College in Ottawa, Canada. In addition to the formation program, about 1,000 people come in every year asking for spiritual accompaniment, and there are 50 spiritual guides working at Le Pèlerin. 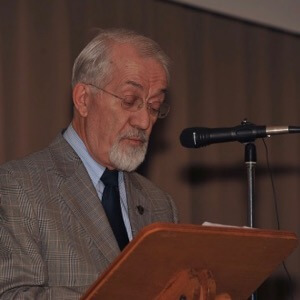 Le Pèlerin has grown over the years, with the formation program being offered in other dioceses in the State of Quebec. Also, in 2017, the first on-line training program was launched, and there are hopes of making the training available in English and Spanish as well.

“This particular work is very much in line with Pope Francis’ insistence that the Church’s key role should be accompanying people in their spiritual journey,” said Br. Gérard Dionne, C.S.C., President of the Board of Le Le Pèlerin. “It is also very much in line with what Blessed Basile  Moreau had in mind for Holy Cross: to renew the Christian faith, to regenerate the society, and to foster better times than ours in response to the present needs of the Church and society.